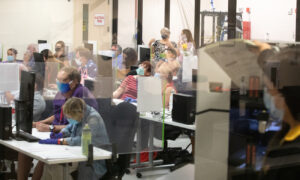 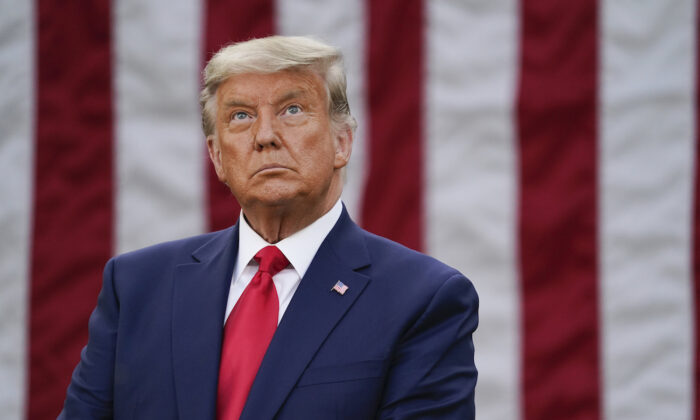 President Donald Trump listens during an event on Operation Warp Speed in the Rose Garden of the White House in Washington on Nov. 13, 2020. (Evan Vucci/AP Photo)
Arizona

Trump Calls In to Arizona Hearing, Says 2020 Election Is the ‘Greatest Scam’

President Donald Trump called in to an election integrity hearing held by members of the Arizona State Legislature on Monday, calling the 2020 presidential election “the greatest scam ever perpetrated on our country.”

The president on Monday evening thanked the witnesses and representatives at the hearing, accusing Democrats of playing “games like nobody has ever seen before.”

The hearing saw Trump’s attorneys Rudy Giuliani and Jenna Ellis, alongside witnesses, appear in front of members of the Arizona Legislature alleging that considerable voter fraud occurred in the state.

Trump claimed that he had won the battleground states of Arizona, Michigan, Georgia, Pennsylvania, and Wisconsin, noting that he secured 11 million more votes than he did in his 2016 presidential bid.

“The 2020 election was rigged. It was a scam, and the whole world is watching and they are laughing at our country,” he said.

His remarks came shortly after Arizona’s Secretary of State Katie Hobbs certified the state’s presidential election results, challenging claims of election fraud by saying all voting machines are certified by a federal commission and reviewed by state officials, that credentialed poll observers witnessed all ballot tabulating, and cameras were in ballot tabulation centers with live streams able to be viewed over the Internet.

According to Hobbs’s website, Democratic presidential nominee Joe Biden beat Trump by about 10,500 votes out of 3.4 million cast. Trump won Arizona in 2016 over Hillary Clinton by about 91,000 votes.

During the call, Trump accused Republican Gov. Doug Ducey of rushing the certification process amid voter fraud allegations, and despite the fact that the hearing was detailing the allegations.

“On top of it, you have a governor named Ducey,” Trump said. “He just rushed to sign certificates … what’s that all about? He didn’t have to sign it. I say, why would he sign when you have these incredible hearings going on that’s showing such corruption and such horrible fraud?”

“You have to figure out what that’s all about with Ducey. He couldn’t go fast enough,” Trump continued. “We’re not going to forget what Ducey just did.”

“This shows how arrogant the Democrats and others were in taking away and stealing an election,” the president said.

Trump brushed aside calls for him to choose the “easier route” and focus on a possible 2024 presidential campaign.

“I have to focus on two weeks ago. This is the greatest scam ever perpetrated on our country,” he said.

Arizona hearings on live right now on @OANN. Such total corruption. So sad for our country!

“Arizona hearings on live right now on @OANN. Such total corruption. So sad for our country!” he said on Twitter.

“We’ve been doing early voting since 1992. Arizona didn’t explore or experiment this year. We didn’t cancel Election Day voting as some pushed for—we weren’t going to disenfranchise any voter. In Arizona, we have some of the strongest election laws in the country, laws that prioritize accountability and clearly lay out procedures for conducting, canvassing, and even contesting the results of an election,” Ducey said in a statement on Twitter.

“We’ve got ID at the polls. We review EVERY signature (every single one) on early ballots—by hand—unlike other states that use computers. Prohibitions on ballot harvesting. Bipartisan poll observers. Clear deadlines, including no ballots allowed after Election Day,” he added.