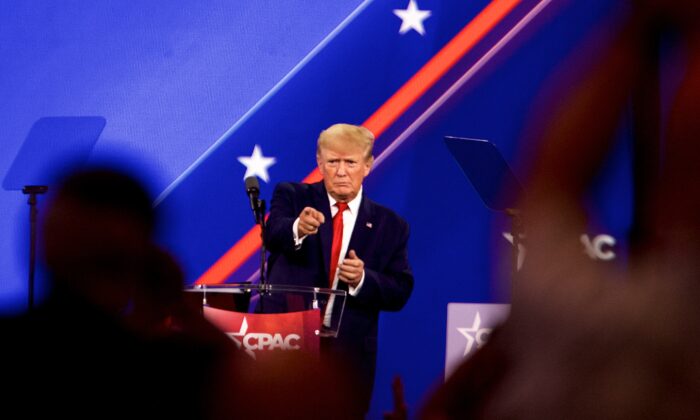 Former President Donald Trump on Saturday called for a “national referendum” on Democrat policies and argued the future of the United States could be at stake.

Speaking at the Conservative Political Action Conference (CPAC) in Dallas, the former president told an audience that GOP candidates need to control Congress and issue a referendum on the Democrats’ policies, namely crime, immigration, and inflation.

“We have to win an earth-shattering victory in 2022,” Trump remarked. “Winning this election needs to be a national referendum on the horrendous catastrophes radical Democrats have inflicted on our country.”

Republicans, he said, need to “restore public safety” across the United States amid elevated homicide and violent crime rates nationwide. That’s “job number one,” he argued.

“People are walking outside and getting shot in the head,” Trump said Saturday. “Because of the radical left’s merciless crusade to dismantle law enforcement in America, our country is now a cesspool of crime that it has never been before.”

‘This Is Not Democracy’

Targeting so-called bail reform policies in largely Democrat-controlled states and municipalities, Trump said that “savage criminals” are being released from jail soon after they are arrested.

“They know what to do and we have to allow them to do it,” the former commander-in-chief added. “We need to return to the tried-and-true strategy of a thing called stop-and-frisk. We have to take the guns away from criminals. Instead of taking guns away from law-abiding Americans, let’s take them away from the violent felons and career criminals for a change.”

Trump reiterated his call for instituting the death penalty for drug dealers, noting that some countries without drug problems employ such measures.

While hinting at a potential third run for the presidency in two years, Trump noted that he won millions more votes in 2020 than in 2016. An unofficial CPAC straw poll this weekend revealed that Trump would overwhelmingly win the 2024 GOP nomination for president, with 69 percent saying they preferred him over other candidates. Florida Gov. Ron DeSantis, a Republican, got second place with 24 percent of the vote.

“We may have to do it again,” Trump said.

In a July interview with New York Magazine, Trump suggested he is deciding when he should announce his 2024 campaign. DeSantis, who has publicly shot down speculation about whether he’s running for president, has been considered a 2024 contender as well.