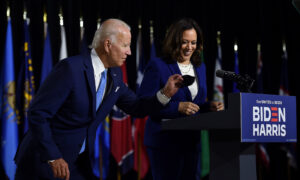 Biden, Harris Condemn Philadelphia Rioting: 'Looting Is Not a Protest, It Is a Crime'
0
Share Now
FacebookTweetParlerEmail
Copy Link 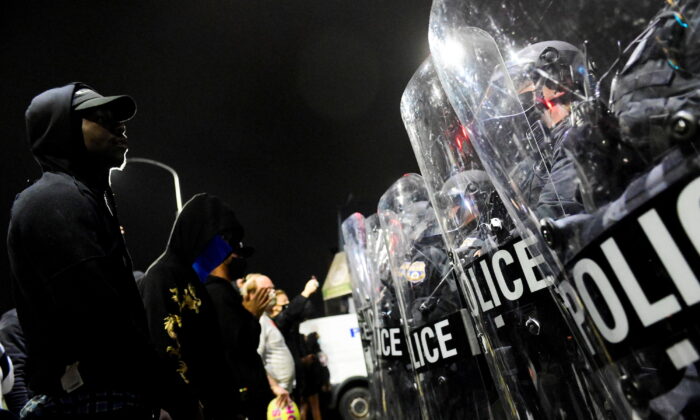 Demonstrators face off with riot police during a rally in Philadelphia, Penn., on Oct. 27, 2020. (Bastiaan Slabbers/Reuters)
Trump Administration

President Donald Trump on Wednesday called for law and order in response to the violence and looting that have mired the streets of Philadelphia after a fatal police shooting of an African American man earlier this week.

“What I am witnessing is terrible and, frankly, the mayor or whoever it is that is allowing people to riot and loot and not stop them is also just a horrible thing,” Trump told reporters during a press conference in Las Vegas. “I saw the event, everybody did. It was on television. It was a terrible event.”

The city experienced two nights of unrest so far this week after the Monday shooting of Walter Wallace Jr., who was armed with a knife and described by relatives as suffering from a mental breakdown, during a confrontation with police officers.

Protests erupted hours after a bystander’s video of the shooting was posted on social media. The footage showed Wallace “advancing toward” two police officers who had their firearms drawn and warned him to put the knife down. The officers were backing up before the camera cut briefly away as gunfire erupted and Wallace collapsed.

Trump said the federal government is looking into the shooting and urged the city leaders to request assistance in order to quell the rioting. Officials told the Philadelphia Inquirer that Gov. Tom Wolf, a Democrat, has already mobilized the National Guard.

Philadelphia police said on Tuesday that up to 1,000 people were involved in looting in the area of Castor and Aramingo avenues and urged residents to avoid the area after widespread demonstrations turned violent as night fell. The protests that began Monday had resulted in about 30 officers injured and over 90 arrests.

Trump took the opportunity to tie the violence to Democrats, suggesting that “this is the group that [Biden] supports.”

“He doesn’t want to condemn them,” the president said. “You have to condemn [them], you have to be strong, you cannot have chaos like that and he will be very, very weak.”

“No amount of anger at the very real injustices in our society excuses violence. Attacking police officers and vandalizing small businesses, which are already struggling during a pandemic, does not bend the moral arc of the universe closer to justice. It hurts our fellow citizens,” the statement says.

“Looting is not a protest, it is a crime. It draws attention away from the real tragedy of a life cut short. As a nation, we are strong enough to both meet the challenges of real police reform, including implementing a national use of force standard, and to maintain peace and security in our communities. That must be our American mission. That is how we will deliver real justice,” it added.

The unrest in Philadelphia is but one of the many cities that saw violence and rioting take over their streets following the death of George Floyd and other African Americans who died in police encounters. Groups of protestors have continuously taken to the streets in Portland, a city that saw weeks of violence after Floyd’s death, to protest against Wallace’s death.