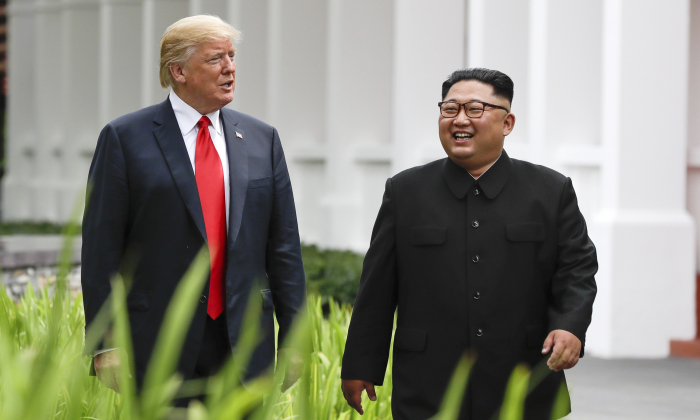 President Donald Trump called for changes to libel laws after a Time magazine editor admitted to making up a quote and attributing it to the president.

“[Ian Bremmer] now admits that he MADE UP ‘a completely ludicrous quote,’ attributing it to me. This is what’s going on in the age of Fake News. People think they can say anything and get away with it,” Trump wrote on Twitter. “Really, the libel laws should be changed to hold Fake News Media accountable!”

Ian Bremmer, an editor-at-large for Time, published a message on Twitter purporting to quote Trump during his visit to Tokyo.

“Kim Jong Un is smarter and would make a better president than Sleepy Joe Biden,” the fake quote stated.

Congressmen and journalists shared the quote as though it was real, before Bremmer admitted hours later that it was fake. Instead of apologizing for inventing the quote, Bremmer commented that it was “objectively a completely ludicrous quote” and argued that he wrote it to make a point that people on Twitter “automatically support whatever political position they have.”

Libel laws in the United States apply differently to public figures as opposed to private citizens. For a public figure to win a defamation claim, it isn’t enough to prove that a statement is false. The public figure also has to prove that the party that made the false claim has malicious intent, a tough legal standard to substantiate in court.

Prior to running for president, Trump was involved in a number of defamation lawsuits but never won a case in a public court, according to the Media Law Research Center. Trump’s lone victory in a defamation suit took place in an arbitration case outside the court system.

Trump filed his first defamation lawsuit in 1984 against an architecture critic who lambasted Trump’s plan to build the world’s tallest building in New York City. A judge dismissed the case because both the critic and the newspaper, the Chicago Tribune, were exercising protected rights to an opinion.

Two decades later, Trump sued a book author who claimed that Trump was a millionaire rather than a billionaire. An appellate court judge ruled that Trump’s attorneys failed to prove that the author was aware his claims were false or that the author published the book with malign intent.

In 2003, Trump withdrew a lawsuit against television host Bill Maher. The lawsuit sought $5 million that Maher said he would give to charity if Trump could prove he was not the son of an orangutan. Trump’s lawyers sent Maher a birth certificate, but the comedian never followed through on the promise to donate money to a charity.

The fake quote by Bremmer touched on Trump’s approval, in a Twitter message, of Kim Jong Un referring to former Vice President Joe Biden as a “low IQ” person.

“I have confidence that Chairman Kim will keep his promise to me, & also smiled when he called Swampman Joe Biden a low IQ individual, & worse. Perhaps that’s sending me a signal?” Trump wrote on Twitter.

Biden leads a crowded field in the race for the 2020 Democratic nomination for president.

Bremmer eventually deleted his tweet and issue an apology, writing that it was meant in jest.

“I should have been clearer,” Bremmer wrote.