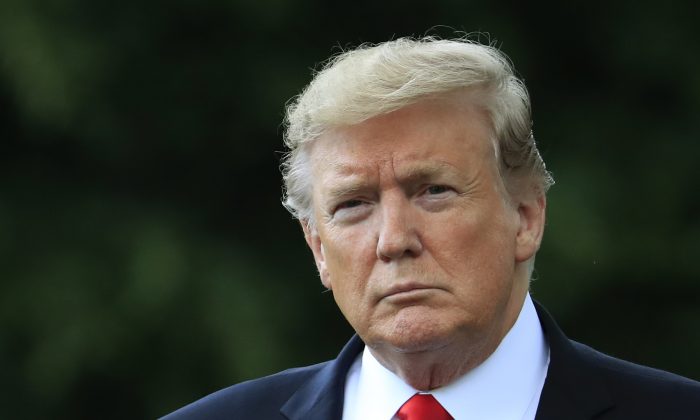 President Donald Trump walks on the South Lawn as he leaves the White House in Washington on May 20, 2019. (Manuel Balce Ceneta/AP)
US-China Relations

“It’s a disgrace,” Trump said on May 20 in a Fox News interview, after agreeing that the Biden family’s links with the Chinese regime should be investigated.

The allegations, which relate to Biden’s son Hunter Biden, were first raised in the 2018 book “Secret Empires: How the American Political Class Hides Corruption and Enriches Family and Friends” by author Peter Schweizer.

In the book, Schweizer alleges a deal took place in 2013 between the now-defunct investment firm Rosemont Seneca Partners—co-founded by Hunter Biden—and the state-run Bank of China.

At the time, a Biden aide disputed the claims in Schweizer’s book. The aide told The Wall Street Journal, in response: “We aren’t going to engage on politically motivated hit pieces based on a series of demonstrable, factual errors from a Breitbart-affiliated author and his financial backers.”

In May, The Intercept reported that Hunter Biden’s Chinese investment firm, Bohai Harvest RST, invests in a Chinese facial recognition company, Face ++, used by the regime to conduct mass surveillance on millions of Uyghur and other Muslim minorities in the northwestern region of Xinjiang.

“They want to take over the world.”

Biden has been rebuked by lawmakers from both sides of the aisle over his comments downplaying the threat posed by the world’s second largest economy.

The president referred to the regime’s ambitious industrial policy “Made in China 2025,” which aims to turn China into a high-tech manufacturing powerhouse by the year 2025, leading in a range of industries including robotics, artificial intelligence, and pharmaceuticals.

The plan has been criticized for being reliant on the theft of technology and trade secrets, primarily targeting the United States and Europe.

“And you notice, they don’t use it anymore.”

Since the onset of the U.S.-China trade war last March, the regime has pulled back on references to the policy. State media outlets were instructed not to mention the policy, and references were removed from certain official documents.

Trump also said the Chinese regime’s recent backtracking on commitments made over months of trade negotiations may have be fueled by hopes it could renegotiate a deal with a future Democratic presidential administration.

“If there’s one reason that China … didn’t make that deal, it’s because they’re hoping that in 16 months Donald Trump will be defeated by any one of those Democrats and they’ll go back to making $500 billion a year,” he said.