By leveraging  federal dollars, Trump will spur investment by state and local governments, as well as the private sector 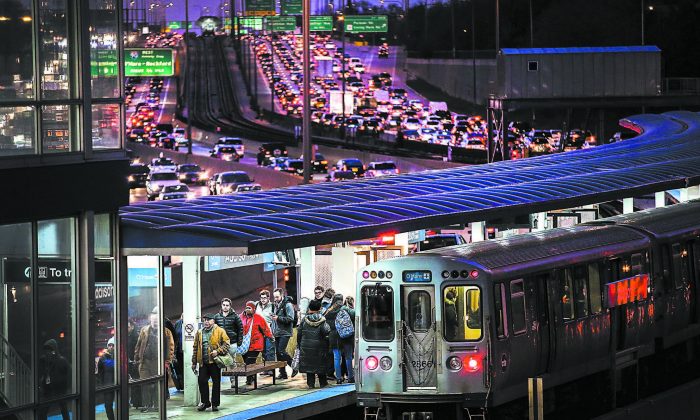 Traffic on the Kennedy Expressway in Chicago on Nov. 21, 2017. America’s infrastructure is out of date and holding the economy back, according to the business community. (SCOTT OLSON/GETTY IMAGES)
By Emel Akan

WASHINGTON—President Donald Trump has asked Democrats and Republicans to work together on a bipartisan bill to modernize America’s “crumbling” infrastructure.

“Together, we can reclaim our building heritage,” he said in the annual State of the Union address on Jan. 30.

“We will build gleaming new roads, bridges, highways, railways, and waterways across our land.”

Trump called on “the  Congress to produce a bill that generates at least $1.5 trillion for the new infrastructure investment,” a larger figure than he previously announced.

As for the funding of these expensive projects, he asked federal funds to be “leveraged by partnering with state and local governments and—where appropriate—tapping into private sector investment.”

There is an infrastructure gap everywhere but mostly so in the United States.
— DOUG PETERSON CEO, S&P Global

The American Society of Civil Engineers (ASCE) gave a near-failing D-plus grade to U.S. infrastructure last year. The report card, which used a simple A to F school grade format, examined the nation’s 16 major infrastructure categories from roads to dams.

The D-plus grade is not surprising, according to Glenn Youngkin, co-CEO of the Carlyle Group, a private equity firm.

Although the grade has not improved since last year, there is a silver lining to America’s infrastructure.

People “have recognized there’s a windfall that is going to come from Washington,” Youngkin said.

“We generally view the current tax bill as helpful to infrastructure,” he said. Especially the lowering of the tax rate and the full expensing of investment upfront are positive for investment projects, he added.

According to S&P Global, America’s infrastructure gap is between $1.4 trillion and $1.5 trillion.

“There is an infrastructure gap everywhere but mostly so in the United States,” Doug Peterson, CEO of S&P Global said at the summit.

To fund this infrastructure deficit, business leaders support innovative financing strategies that include a mix of federal, state, local, and private funding. They are confident that enormous private capital could be mobilized for U.S. infrastructure investments.

“We estimate that there are literally trillions of dollars of funds available around the globe from pension funds, from insurance companies,” Peterson said.

Infrastructure projects are attractive asset classes for investors due to their long-term and predictable nature, he said.

Any bill should also streamline the permitting and approval process, which is vital for the success of infrastructure projects, according to Trump and business leaders.

“We built the empire state building in just one year,” Trump said. “Isn’t it a disgrace that it can now take ten years just to get a minor permit approved for the building of a simple road?”

The U.S. Chamber of Commerce supports the administration’s “One Federal Decision” executive order and calls on Congress to codify the changes into law.

“It shouldn’t take longer to approve a project than to build it,” Thomas Donohue, president and CEO of the U.S. Chamber of Commerce, said at the infrastructure summit.

On Aug. 15, Trump signed an executive order to speed up the environmental review and permitting process. The order aims to fix the fragmented approval system and establishes a two-year goal to process documents for major infrastructure projects.

We built the Empire State Building in just one year. Isn’t it a disgrace that it can now take ten years just to get a minor permit approved for the building of a simple road?
— President Donald Trump

The executive order also calls for one federal decision under which the lead agency will work with other relevant agencies to decide whether an infrastructure project goes forward.

The builders would no longer wait for 17 years to get approval or rejection, Trump said at a meeting with around 100 of the nation’s mayors on Jan. 24.

There is a massive skills shortage in the construction industry, which is another major challenge. To modernize the nation’s infrastructure, the United States needs more skilled construction workers.

“Nearly 80 percent of construction firms report that they are having a hard time finding qualified workers,” said Donohue.

The administration’s efforts to promote work-based learning, like apprenticeships, is an important step toward expanding the workforce, he added.

The skills shortage is a broad issue that cuts across many industries. However, it is becoming even more pressing for construction jobs, according to industry experts.

“As tax cuts create new jobs, let us invest in workforce development and job training,” Trump said in the State of the Union speech.

“Let us open great vocational schools so our future workers can learn a craft and realize their full potential.”