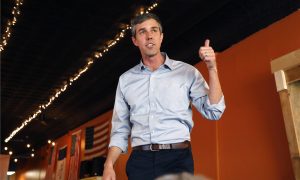 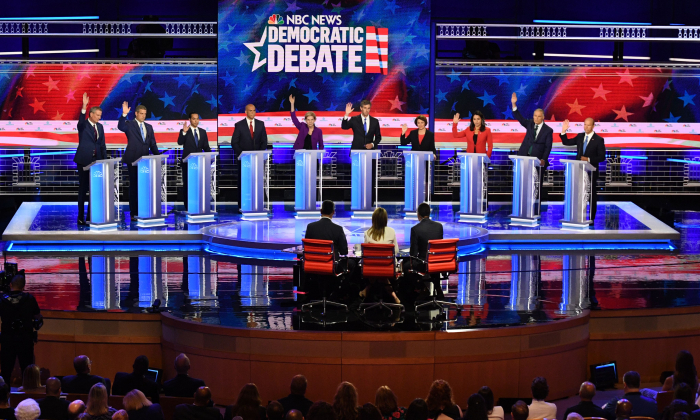 President Donald Trump on June 26 called the first Democratic presidential primary boring, and ridiculed NBC and MSNBC for an audio failure that forced the hosts to pause the debate to resolve the issue.

Ten of the 20 candidates who qualified for the first Democratic presidential primary debate jostled for attention on the national stage at the Adrienne Arsht Center for the Performing Arts in Miami.

The president issued his one-word comment early in the debate, at a point when the candidates opted for rhetoric instead of concrete proposals.

“BORING,” Trump wrote on Twitter, as he headed to the G-20 summit in Japan.

The candidates didn’t offer the kind of bold policy ideas or personal attacks that would grab newspaper headlines on the heels of the debate. Instead, some of the earliest coverage of the event focused on a production failure by NBC that prompted the hosts to cut to a commercial break.

As one of the debate hosts asked a question about limiting Americans’ rights to own guns, the sound of a conversation taking place off-stage filled the hall, prompting shrugs and laughter from the candidates.

“We are hearing our colleagues’ audio. If the control room can turn off the mics of our prior moderators,” Chuck Todd, a moderator, said as the audience laughed.

“We prepared for everything, but we did not prepare for this,” Maddow said.

The debate then cut to a four-minute break. Not long after, Trump fired off a message ridiculing the gaffe.

“NBC News MSNBC should be ashamed of themselves for having such a horrible technical breakdown in the middle of the debate. Truly unprofessional and only worthy of a FAKE NEWS Organization, which they are!” the president wrote on Twitter.

All of the candidates, except Warren, O’Rourke, and Booker, were polling at 1 percent or less prior to the debate, according to an average of polls maintained by Real Clear Politics. Warren held a 9.5 percent lead over O’Rourke, who was polling at just over 3 percent.

The most concrete answers of the night were in response to a pair of show-of-hands queries on health care and the Iran deal, and a one-word-response question about geopolitical threats.

Only de Blasio and Warren raised their hands. The lack of support was a surprise because many of the candidates have been embracing the socialist Medicare for All policy proposal in the months leading up to the debate. Medicare for All calls for abolishing private health insurance in favor of a single, government-run system. Gabbard later clarified that she supports Medicare for All, but didn’t explain how that squares with her refusal to give up her private health plan.

In another query, the host asked the candidates to raise their hands if they would rejoin the Iran nuclear deal from which Trump withdrew. All but Booker raised their hands. Booker explained that he would negotiate for a better deal.

The Trump campaign later issued a statement saying, “This debate was the best argument for President Trump’s re-election.”

“The Democrats proposed a radical government takeover of American society that would demolish the American dream so many are gaining access to under the growing Trump economy,” Kayleigh McEnany, the national press secretary for the Trump campaign, said in a statement.

Trump won Florida—the state where the debate took place—in the 2016 presidential election. The president announced his reelection in Orlando and considers his Mar-a-Lago resort the “Winter White House.”

The second part of the debate will air on June 27 and feature the frontrunners of the Democratic primary: former Vice President Joe Biden and Sen. Bernie Sanders (I-Vt.).

Climate Change and an Agenda of Political Control—Myron Ebell