Trump Calling for Expedited Removal, Not End to Due Process at Border: Former Judge

WASHINGTON—President Donald Trump’s morning tweets about border security set off a deluge of reports that he was calling for the end to due process.

“Hiring many thousands of judges, and going through a long and complicated legal process, is not the way to go – will always be disfunctional [sic]. People must simply be stopped at the Border and told they cannot come into the U.S. illegally. Children brought back to their country,” Trump wrote on Twitter on June 25.

“If this is done, illegal immigration will be stopped in it’s [sic] tracks – and at very little, by comparison, cost. This is the only real answer – and we must continue to BUILD THE WALL!”

However, Trump is not suggesting to throw due process out the window, said Art Arthur, a former immigration court judge and current resident fellow in law and policy at the Center for Immigration Studies.

“This procedure is in place; it’s not like he’s coming up with some crazy idea that doesn’t exist,” Arthur said.

He said Trump is calling for enforcement of the current law under the Immigration and Nationality Act.

“If you enter the United States illegally and you’re apprehended shortly thereafter—within close proximity to the border—or you come in through the port of entry without proper documents, you’re subject to expedited removal,  where DHS [Department of Homeland Security] can make the determination that you’re removable and just send you back home,” Arthur said. “You’d never see an immigration judge.”

He said it’s only when someone makes a valid claim for asylum that the individual actually sees an immigration judge.

“Curbing the abuses in the expedited removal process will actually put us in a position that the president is calling for,” he said.

Anyone who is arrested by Border Patrol after entering illegally, or who is arrested at a port of entry for not having the required travel documentation, can claim credible fear.

The person is then screened by an asylum officer to assess the credible fear claim.

“Asylum officers grant anywhere between 75 and 90 percent of all those requests,” said Arthur in a former interview. “If you’re found to have a credible fear, you are then put into removal proceedings before an immigration judge.”

Those individuals are then released into the United States with a court date to determine their asylum status many years down the road.

This is also known as “catch and release,” which Trump has also been outspoken about.

After six months of a pending case, the asylum-seeker is able to get work authorization.

Many simply do not show up at their court appointment, and of the ones who do, about 13 percent are granted asylum, according to fiscal year 2016 numbers, when more than 65,000 asylum applications were received.

The result of a June 11 reversal of an immigration court ruling by Attorney General Jeff Sessions, which clarifies the credible fear criteria, is that fewer people will pass credible fear screening, Arthur said.

Sessions said in the ruling that individuals who are fleeing crime and domestic violence, but are not persecuted by their own government, do not fall under the asylum criteria.

“I would call for doubling the number of immigration judges,” he said.

Hiring manythousands of judges, and going through a long and complicated legal process, is not the way to go – will always be disfunctional. People must simply be stopped at the Border and told they cannot come into the U.S. illegally. Children brought back to their country……

….If this is done, illegal immigration will be stopped in it’s tracks – and at very little, by comparison, cost. This is the only real answer – and we must continue to BUILD THE WALL!

Arthur said Trump’s comment in the tweets about “children brought back to their country” refers to the president’s call for a change to the Trafficking Victims Protection Reauthorization Act (TVPRA).

Under the TVPRA, unaccompanied minors—those under 18 traveling without an adult—from anywhere but Mexico and Canada cannot be turned back, so the United States is forced to accept them, even if they cannot verify their age, identity, credible fear status, or criminal background.

Unaccompanied minors are turned over to Health and Human Services, which releases most within about 57 days to a parent or family member already living in the United States, often illegally.

The Border Security and Immigration Reform Act of 2018, known as a bipartisan compromise on immigration reform, is set to hit the floor of the House this week. It would amend the TVPRA to provide the ability to return any minor not eligible for entry back to their home country. 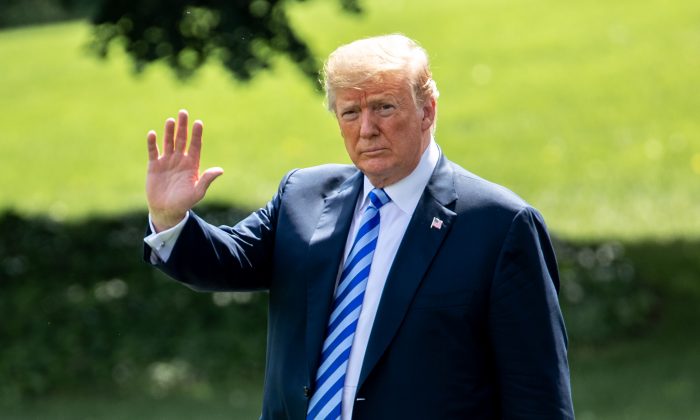