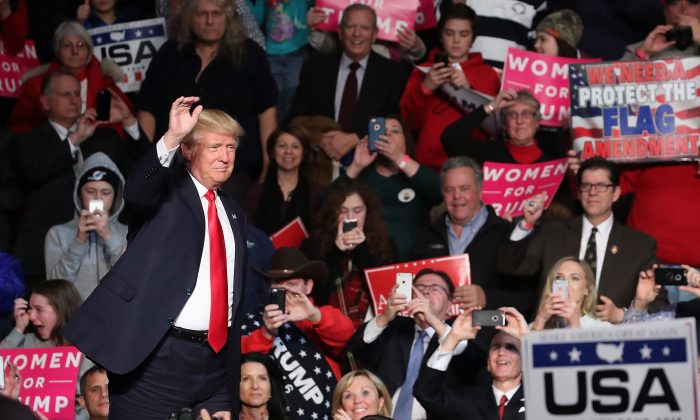 US President-elect Donald Trump is introduced to speak to supporters at the Giant Center in Hershey, Pennsylvania on Dec. 15, 2016. (Mark Wilson/Getty Images)
US

Trump Cabinet Excites His Voters: ‘We Have to Trust Him’

As each Cabinet announcement draws fresh criticism of the wealth, connections or opinions of Donald Trump’s latest appointees, many Americans who voted for him say the president-elect is doing what he promised to do: draining the swamp.

To them, the idea of a defense secretary nicknamed “Mad Dog” is bliss. They rejoice in an energy secretary who once said he would eliminate the Department of Energy. And while some Trump supporters balk at ExxonMobil CEO Rex Tillerson’s close ties with Russia’s Vladimir Putin, they say they will trust Trump’s judgment about his secretary of state nominee.

These voters say the affluence of his Cabinet picks is an advantage, not a liability.

“The guys he’s putting in there, they don’t need to do this. They’re independently wealthy,” said Trump voter Roger Mansfield, 67, a small business owner in Carlisle, Pennsylvania. “They don’t need any more money. The motivation is to make pragmatic, rational business decisions. What could be wrong about that?”

The Associated Press interviewed Trump voters about his Cabinet picks and other postelection revelations, such as a CIA assessment that Russia interfered in the November election on Trump’s behalf. While certain Republicans in Congress have endorsed investigations into the Russian meddling, the idea drew jeers from Shay Chamberlain, 37, of Menomonie, Wisconsin.

“That’s kind of ridiculous,” Chamberlain said. “I tried to influence the elections, you know what I mean? I mean, we all did when we went on Facebook and put silly memes on there and tried to influence our friends to go one way or another.”

Some Cabinet choices have been called into question for their lack of experience, their extraordinary wealth, or their past relationships with the departments they are to lead. Most of the criticism has come from Democrats, but some Republicans have also raised doubts.

John Barnes, a 60-year-old Air Force retiree living in Albuquerque, said he liked that Trump was “hiring outsiders and not local yokel knuckleheads.”

But Lewis, 67, said he is skeptical about Tillerson, who has opposed sanctions levied on Moscow, and about Trump’s hope of improving relations with Russia.

“I don’t see that we need to have a buddy-buddy relationship with Russia or China or any of them. We need to remain strong, help where we can,” Lewis said. “Being buddies with Russia, that’s only going to cause us problems.”

On jobs, some Trump voters are celebrating.

“I’m tickled pink, man,” said Jimmy McDonald, an assistant bank vice president, from Tazewell County, Virginia. Some laid-off miners in Appalachia have been called back to work, some shortly before Trump was elected. One factor was a recent spike in the price of metallurgical coal used to make steel. McDonald credits Trump.

“More coal’s being brought out right now since the last 60 days actually,” said McDonald, 57. “Trump made that a major focus of his campaign in August, when he started talking about the coal miners, and the coal trains are running, man. And people are excited. It’s just a different vibe in the air right now.”

“His promising to bring all those jobs back? I think he over spoke on that a little bit. I don’t feel confident on that,” Zbichorski said. A skit on “Saturday Night Live” mocking an unemployed coal miner eagerly expecting Trump to get him back to work shifted her views, she said.

“Some of those jobs are dying.” She was swayed, too, by an Indiana union leader who criticized Trump for raising false hopes by inflating the number of jobs being saved at a Carrier Corp. factory in Indianapolis.

However, Jack Stauffenberg, a 65-year-old coal company superintendent from New Tripoli, Pennsylvania, said that Indiana union leader was off base, explaining that Trump “talks in round numbers.”

“Look at the stock market,” Stauffenberg said, referring to Wall Street’s recent streak of records. “That expresses the optimism of this country right now.”

Americans sense that the country is “being righted, and we’re kind of getting a new start,” he added.

“I don’t like the indoctrination that goes on in the public schools. They teach the theory of evolution as truth,” said Barlow, who has an infant grandson. “If people want to send their kids to a Christian school, they should get help with that.”

If they had their wishes, some Trump voters would tone him down on Twitter.

Zbichorski thinks Trump will need “more tact and professionalism” when he takes office, and she worries he’ll tweet an insult about a leader of another country and escalate international tensions. “Right now, he’s just being who he is. No filter,” she said.

“He kind of almost promised the American people, ‘If I’m elected, she’ll pay. If I’m elected, I’ll hold her accountable.’ And then as soon as he won, it was kind of nicey-nice. ‘You know I’m not really going to go after her,'” Chamberlain said.

Mansfield said he trusts Trump to act in the country’s best interests.

“Do we have any choice? We have to trust him. He’s going to be our president. Wishing him to fail would be like getting on an airliner and hoping the two pilots don’t know what they’re doing,” he said. “My gut says he will do the right thing.”