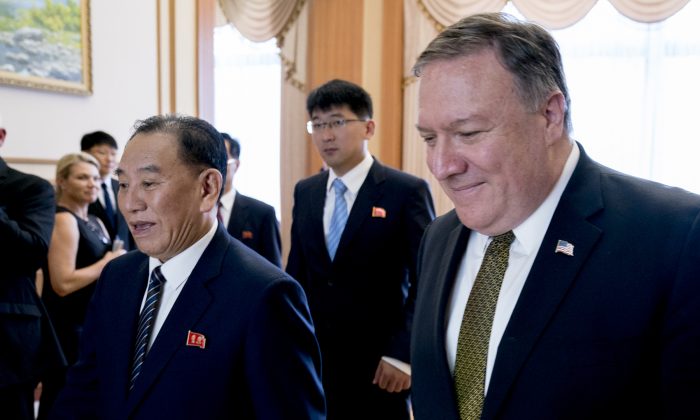 As U.S. President Donald Trump made comments on July 9 hinting that China was behind efforts to derail progress on denuclearizing North Korea, reports emerged that the North has completed construction on an underground tunnel linking North Korea’s military materials factories near the border with China—allowing the regime to secretly move intercontinental ballistic missiles (ICBM).

An insider source in North Korea told Daily NK, a South Korean news site, on July 6 that the project was commissioned by North Korean leader Kim Jong Un in 2014 and was completed this April. The tunnel was created in order to avoid detection when ICBMs are moved or prepared for launch.

The tunnel is located in Chagang Province, which borders China’s northernmost Jilin Province. Many factories have been built in the area, as the mountainous terrain can act as fortification, according to Daily NK. Among them are a facility for manufacturing biological weapons and tractors.

“Once Kim gives the orders, within three to seven minutes, an ICBM can be launched,” the insider told Daily NK.

Based on South Korean military intelligence, Pyongyang is working on the submarine on its east coast, said Kim Hack-yong, a legislator on the defense committee.

An aide to Kim told WSJ that satellite imagery reviewed by South Korean intelligence officials revealed laborers and materials being moved at the port of Sinpo, which faces the Sea of Japan. The submarine appears to be under construction at an indoor facility, the aide added.

These latest developments reveal that despite North Korea’s promises to denuclearize, it seems to be doing the opposite, while concealing its true intentions.

North Korea’s claims seemed to contradict comments Pompeo made after his day and a half of talks with officials in North Korea. He told reporters upon departure that progress was made on “almost all of the central issues.”

“The U.S. side came up only with its unilateral and gangster-like demand for denuclearization,” a North Korean foreign ministry spokesman said in a statement carried by the North Korea’s state-run KCNA news agency.

The spokesman said Pompeo‘s delegation insisted on unilateral complete, verifiable, and irreversible denuclearization, known as CVID. He argued instead for both sides to take a series of simultaneous steps as a “shortcut” to a nuclear-free Korean Peninsula.

Following this development, on July 9 morning, Trump made his first public comments following Pompeo’s North Korea visit. “I have confidence that Kim Jong Un will honor the contract we signed &, even more importantly, our handshake. We agreed to the denuclearization of North Korea,” Trump posted on Twitter. “China, on the other hand, may be exerting negative pressure on a deal because of our posture on Chinese Trade-Hope Not!”

China and the United States are in the midst of a bitter trade spat after they imposed tit-for-tat tariffs on $34 billion worth of each other’s imports that went into effect on July 6.

“I see China’s hands all over this. We’re in a fight with China,” Graham said, alluding to the trade tensions.

Pompeo has since brushed off North Korea’s charges, saying that he was committed to keep pursuing “difficult” denuclearization talks with the regime. Pompeo was in Tokyo on July 8 to meet with his Japanese and South Korean counterparts.

At the trilateral meeting, the three countries promised to step up coordination efforts in dealing with North Korea, according to a Japan Times report.