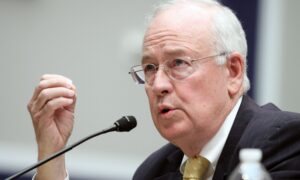 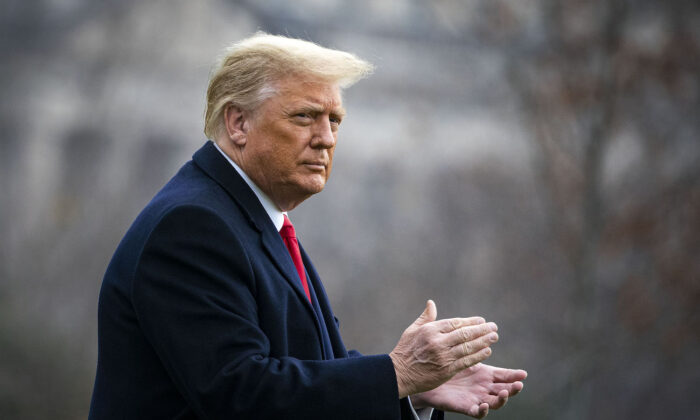 President Donald Trump departs on the South Lawn of the White House, in Washington, on Dec. 12, 2020. (Al Drago/Getty Images)
Pennsylvania

Trump: ‘Big News Coming out of Pennsylvania’ About Drop Boxes

President Donald Trump on Monday morning announced that there will be “big news” in Pennsylvania as he challenges the election results in the commonwealth.

It’s not clear if the president was referring to the appeal that his campaign filed on Sunday in the U.S. Supreme Court, previously revealed information by third parties, or a new development. The Epoch Times reached out to Trump’s campaign for comment, but hasn’t yet received a response.

Trump’s campaign’s case (pdf) is attempting to reverse three cases decided by the state’s Supreme Court that “illegally changed” the mail-in ballot laws “immediately before and after the 2020 presidential election.” The lawyers contended that the Supreme Court’s decisions are in violation of Article II of the Constitution and the 2000 Bush v. Gore ruling.

In October, a federal judge in Pennsylvania rejected a Trump campaign lawsuit that attempted to bar mail-in ballot drop boxes across the commonwealth. The drop boxes were used in the 2020 Democratic primary and were deployed in the midst of the CCP virus pandemic.

“Defendants have sacrificed the sanctity of in-person voting at the altar of unmonitored mail-in voting and have exponentially enhanced the threat that fraudulent or otherwise ineligible ballots will be cast and counted in the forthcoming general election,” read the campaign’s initial lawsuit. But on Oct. 10, U.S. District Judge J. Nicholas Ranjan ruled in favor of the state’s ballot drop boxes.

“While Plaintiffs may not need to prove actual voter fraud, they must at least prove that such fraud is ‘certainly impending.’ They haven’t met that burden,” wrote Ranjan, a Trump appointee.

Last week, Rep. Mike Kelly’s (R-Pa.) lawyers filed a new petition to the Supreme Court arguing that the Pennsylvania Supreme Court was incorrect when it dismissed their case. The nation’s top court had previously rejected the group’s request for immediate injunctive relief to block Pennsylvania from taking further steps to certify the 2020 election results. At the time, the group’s lawyer, Greg Teufel, said the case was not over because his clients were planning to file a formal petition to ask the court to review the lawsuit, which they hadn’t filed the first time.