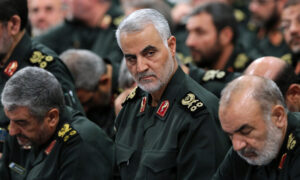 Trump: Biden Should Release His Own List of Potential Supreme Court Nominees
0 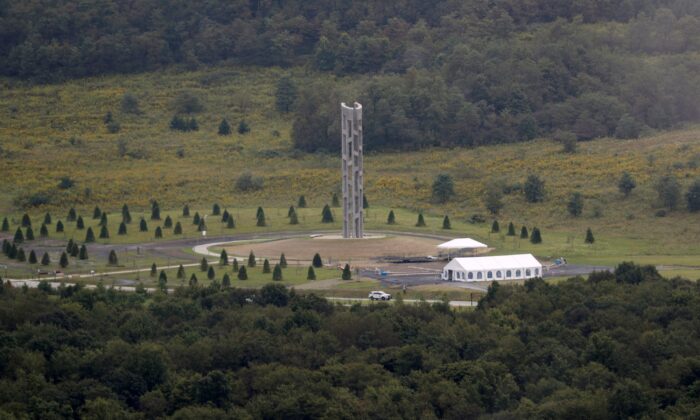 The ninety three foot tower at at the Flight 93 National Memorial is seen from one of the U.S. Marine helicopters transporting President Donald Trump, White House staff, and press after the president attended the 17th annual September 11 observance at the memorial near Shanksville, Penn., on Sept. 11, 2018. (Kevin Lamarque/Reuters)
2020 Election

President Donald Trump and his challenger Joe Biden visited separate memorials on Friday to honor those who were killed in the Sept. 11, 2001, terrorist attacks.

Trump and First Lady Melania Trump took part in a private ceremony at the Flight 93 National Memorial in Shanksville, Pennsylvania.

A plane struck the ground there after dozens of passengers and crew members thwarted plans to ram it into the U.S. Capitol.

The observance was scheduled to include remarks from Ed Root, cousin of flight attendant Lorraine Bay, who lost her life along with everyone else onboard the plane, along with Trump and Secretary of the Interior David Bernhardt.

They first went to New York City to attend a commemoration ceremony at the 9/11 Memorial & Museum.

The memorial and museum mark the spot where terrorists flew two airplanes into the World Trade Center’s twin towers.

Biden told reporters at the New Castle Airport early Friday that he doesn’t plan to make news, calling it a “solemn day.”

“I’m not going to talk about anything other than 9/11. We took all our advertising down. It’s a solemn day. That’s how we’re going to keep it,” he said.

The New York ceremony included family members of the victims but would adhere to state and federal guidelines regarding social distancing and other measures mandated during the COVID-19 pandemic, the memorial said.

Typically, family members read the names of those who lost their lives, but this year people heard recorded readings of the names.

The couple was going to take part in a remembrance ceremony. Harris planned to deliver remarks there.

After returning to Washington, Trump is slated to present the Medal of Honor to a sergeant major who served in Iraq.

Sergeant Major Thomas Payne will receive the Medal of Honor next week for his actions during a “daring” hostage rescue operation in Kirkuk Province, the White House announced.

Trump told a rally in Michigan late Thursday that his administration will “will strike down terrorists who threaten our citizens.” He didn’t appear to directly reference the 2001 terrorist attacks.

Trump on Friday morning posted a picture on social media of he and the first lady at a previous Sept. 11 ceremony, using the hashtag “#NeverForget.”

In another post, he added: “In 2001, our Nation, united under God, made an unbreakable promise never to forget the nearly 3,000 innocent Americans who were senselessly killed on September 11th. On this sacred day—Patriot Day—we solemnly honor that commitment.”

Vice President Mike Pence and Second Lady Karen Pence joined the Bidens in New York, where they were scheduled to participate in a Tunnels to Towers Foundation ceremony.

The ceremony featured the live reading of the names of the 2,977 killed in the attacks.

The Pences also went to the memorial and museum, where the vice president greeted Biden.