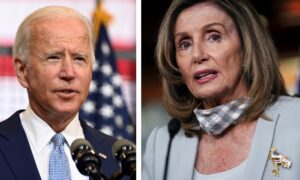 Trump, Biden to Face Off in First Debate

President Donald Trump and Democratic presidential nominee Joe Biden are set to face off Tuesday in their first head-to-head debate, with the Nov. 3 election just over a month away.

The debate is scheduled to start at 9 p.m. Eastern Time, last for 90 minutes, and feature the candidates answering questions about six topics, including COVID-19, violence in cities, and the economy.

The Epoch Times’ sister media NTD Television will carry the debate. Viewers online can watch it on the NTD and The Epoch Times websites.

The candidates will debate at Case Western Reserve University and Cleveland Clinic in Cleveland, Ohio. They will not shake hands. They will debate before an audience of 100, a number limited by health concerns stemming from the COVID-19 pandemic.

Chris Wallace of Fox News will moderate the debate.

The heated battle between the campaigns heightened on Tuesday in the hours leading up to the debate. Trump’s campaign said Biden’s campaign initially approved a request to have both candidates inspected for electronic devices before reversing the decision, which a Biden campaign official called “completely absurd.”

Biden’s campaign claimed Trump’s campaign asked Wallace not to bring up how many Americans have died with COVID-19, which a Trump campaign official called “a lie.”

Biden in the last week has stayed out of the public eye multiple times, ostensibly to prepare for the debate. The last time he campaigned in person was on Sept. 23, according to an Epoch Times review of his schedule. Biden told reporters that morning about debate preparation: “I’ve started to prepare, but I haven’t gotten into it really heavily. I will, beginning tomorrow.”

Trump told reporters on Sunday that he was getting prepared with the help of his personal attorney Rudy Giuliani and former New Jersey Gov. Chris Christie, who have been acting the role of Biden.

Trump has said he thinks Biden will “do great” but has also called on his rival to undergo drug testing, citing an alleged uneven performance across the Democratic primary debates.

Biden’s deputy campaign manager Kate Bedingfield responded by accusing the president of making the claim in an attempt to deflect away from the COVID-19 pandemic.

Asked by a reporter to respond to Trump’s claims, Biden said, “He’s almost … No, I have no comment.”

The Biden campaign announced Tuesday that the nominee’s guests for the debate will be Kristin Urquiza, whose father died with COVID-19; Gurnee Green, a small business owner from Cleveland Heights; and James Evanoff Jr., a service technician in Cleveland who is part of the United Steel Workers union.

Trump’s guests will include his lawyer Rudy Giuliani, and Ultimate Fighting Championship fighter Colby Covington, a Trump official told reporters during the flight to Cleveland.

Biden, he added, “has never solved a problem” despite spending decades in Washington.

Asked what he wants to accomplish during the debate, Biden told reporters that he plans to “tell the truth,” without expanding further.

The second debate, slated for Miami on Oct. 15, will be moderated by Steve Scully, an executive producer for C-SPAN, according to the Commission on Presidential Debates, which describes itself as a nonpartisan nonprofit that handles scheduling and details for presidential debates.

Kristen Welker, a White House correspondent for NBC News, was tabbed to moderate the third debate, scheduled in Nashville, Tennessee, on Oct. 22.

USA Today’s Washington bureau chief Susan Page is marked down to moderate the sole debate between the vice president and the Democrat nominee.