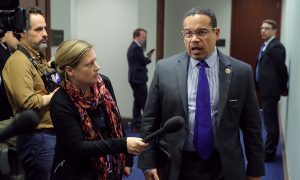 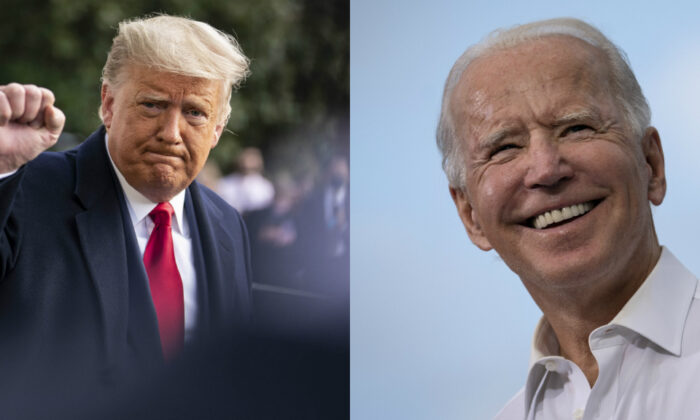 President Donald Trump (L) speaks to the press outside of the White House in Washington on Oct. 30, 2020. (R) Democratic presidential nominee Joe Biden speaks during a drive-in campaign rally in the parking lot of Cellairis Ampitheatre in Atlanta, Ga., on Oct. 27, 2020. (Sarah Silbiger and Drew Angerer/Getty Images)
2020 Election

Trump, Biden Heading to Multiple States on Day Before Election

President Donald Trump and challenger Joe Biden are holding a number of competing rallies on Monday, the day before Election Day.

Trump’s whirlwind schedule continues with a mid-morning flight from Florida, where he spoke into the early hours of Nov. 2 to cap off a frantic five-state tour in a bid to drum up votes, to North Carolina.

The Republican’s official schedule has him leaving Grand Rapids just before midnight for Washington, where he will return to the White House at 1:30 a.m. Nov. 3.

Trump is spending election night in Washington while Biden, 77, watches for vote tallies from his home state of Delaware.

Biden, accompanied by his wife, Jill Biden, is slated to deliver remarks in Cleveland, Ohio, on Monday afternoon before kicking off a canvass in Beaver County and attending a drive-in event in Pittsburg, both in Pennsylvania.

Biden is scheduled to participate in four other events in Pennsylvania later in the day, including a drive-in event with performer Lady Gaga.

Pennsylvania is a crucial swing state that delivers the victor 20 electoral votes. Trump won Pennsylvania by 0.72 percent in 2016.

Sen. Kamala Harris (D-Calif.), Biden’s running mate, is also traveling to Pennsylvania on Monday, along with her husband, Doug Emhoff.

The Bidens, Harris, and Emhoff “will barnstorm Pennsylvania and fan out across all four corners of the state,” Biden’s campaign said in a statement.

“All will hold events to get out the vote while also discussing how to bring Americans together to address the crises facing the country and win the battle for the soul of the nation.”

Vice President Mike Pence will also be in Pennsylvania on Monday, holding at least two rallies.

Tim Murtaugh, the Trump campaign’s communications director, asserted late Sunday a contrast in the demeanor of the two candidates.

“The contrast in demeanor of the candidates today is remarkable. @realDonaldTrump is obviously having a blast barnstorming the country. Biden is enraged during his day trip across the Delaware border to Philadelphia. One guy feels momentum. The other feels it slipping away,” he said in a social media statement.

Jason Miller, a Trump campaign adviser, said Sunday on ABC’s “This Week” that campaign officials are feeling good about their chances for another win.

“We think that President Trump is going to hold all of the Sun Belt states that he won previously. And as you look to the upper Midwest, Joe Biden has to stop President Trump in four out of four states; Pennsylvania, Michigan, Wisconsin, Minnesota. If President Trump wins just one of those in three of the four that he won last time, he will be a reelected president,” he said.

But Anita Dunn, a Biden campaign adviser, argued that the number of close battleground states has grown in recent months, referring to polling that suggests Biden is competitive in states like Georgia and Iowa.

“But if you look at the enormous enthusiasm that we’ve seen in the early vote, these record-setting early vote numbers, people are going to vote. And we are going to know on Election Day that a record number of people have probably turned out to vote in this election because they want change. They want a leader who is going to unite this country, not divide it.”

While the campaigns focus on Pennsylvania, a top elections official warned over the weekend that it could take several days to count all the ballots, meaning a winner may not be declared on election night.

“I expect that the overwhelming majority of ballots in Pennsylvania, that’s mail-in and absentee ballots, as well as in-person ballots, will be counted within a matter of days,” Kathy Boockvar, Pennsylvania’s secretary of state, said during an appearance on NBC’s “Meet the Press.”

“I just want to set that straight, that this is a process, and we want to make sure that every single vote of every valid voter is securely and accurately counted,” she added.

The state’s official voting website says that the results of some races may not be known on the night of the election.

Pennsylvania Lt. Gov. John Fetterman, another Democrat, fretted over the support state residents have shown Trump in recent days, saying Sunday, “I’m not saying Donald Trump is going to win Pennsylvania, but what I am saying is he’s doing everything that he can to maximize his chances.”