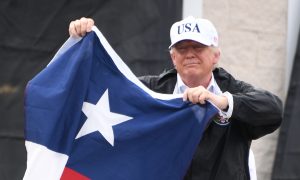 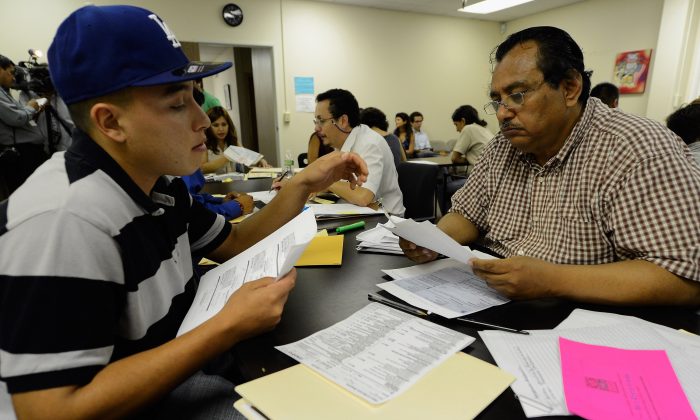 LOS ANGELES, CA - AUGUST 15: Oscar Barrera-Gonzalez (L) receives help from volunteer Ivan Corpeno in filing up his application for Deferred Action for Childhood Arrivals program at Coalition for Humane Immigrant Rights of Los Angeles on August 15, 2012 in Los Angeles, California. Under a new program established by the Obama administration undocumented youth who qualify for the program, called Deferred Action for Childhood Arrivals, can file applications from the U.S. Citizenship and Immigration Services website to avoid deportation and obtain the right to work (Photo by Kevork Djansezian/Getty Images)
US

Trump Between a Rock and a Hard Place With DACA

Ultimately, it will be up to Congress to decide on a permanent solution
By Charlotte Cuthbertson
biggersmaller
Print

The thorniest, most emotionally charged immigration issue confronting the president is DACA, or Deferred Action for Childhood Arrivals.

More than 780,000 people who entered the country illegally before they turned 16 have been given DACA status since former President Barack Obama introduced the program in 2012.

For those eligible, DACA gives work authorization and a renewable, two-year reprieve from deportation. Eighty-one percent of the recipients are Mexican.

So far, DACA recipients have avoided President Donald Trump’s no-nonsense enforcement of federal immigration laws, but the issue is bubbling up again as 10 state attorneys general prepare to challenge it in court if Trump does not phase it out by Sept. 5.

The state attorneys general attest that similar programs have already been blocked for being unlawful.

On June 23, 2016, the Supreme Court upheld a decision to halt Obama’s 2014 attempt to expand DACA and introduce DAPA (Deferred Action for Parents of Americans).

DAPA would have granted temporary deportation reprieve and work authorizations to an estimated 3.6 million illegal immigrants who had a child that was a U.S. citizen or lawful permanent resident, and met certain other criteria.

In June this year, Trump ended the DAPA amnesty altogether, but left DACA alive, indicating he wasn’t going to rip the Band-Aid off entirely. In April, Trump said DACA recipients could “rest easy.”

But the state attorneys general say current DACA permits should be left to expire and no new ones should be issued.

“The Executive Branch does not have the unilateral power to confer lawful presence and work authorization on unlawfully present aliens simply because the Executive chooses not to remove them,” the group said in a June 29 letter to Attorney General Jeff Sessions.

Texas Attorney General Ken Paxton, who is leading the charge against DACA, was joined on the letter by the attorneys general of Alabama, Arkansas, Idaho, Kansas, Louisiana, Nebraska, South Carolina, Tennessee, and West Virginia, as well as Idaho Gov. C.L. Otter.

A White House spokesperson confirmed to The Epoch Times that the DACA program is “currently under review,” in an email on Aug. 28.

The spokesperson reiterated that “only Congress can legislate a permanent fix for the situation DACA recipients face.”

Keeping the program going would kick the can further down the road, and some form of the now-defunct DREAM Act would have to be revived by Congress to enact a permanent solution.

Alternatively, Trump could end the program at any time. Or he could sit tight until it goes to court after Sept. 5 and see what happens. In that scenario, an outcome against DACA seems “very likely,” according to Julia Gelatt, senior policy analyst with the Migration Policy Institute, a Washington think tank.

The case would go to the same Texas judge that ruled an injunction against DAPA and the expanded DACA last year, and it would eventually head to the Supreme Court.

“It’s a really difficult decision,” said Gelatt. “[Trump’s] really in a tough position with the Sept. 5 deadline hanging over him.”

The difficulty, said Gelatt, is compounded because the DACA recipients came to the United States before they were 16 and were still too young to be held responsible for their migration decision.

“Many feel more American; they hardly remember their home country. They’re well-integrated into U.S. communities, and universities and colleges, and many, many workplaces across the country,” she said. “And they’ve worked to be really highly visible activists and to really bring a lot of attention to the issues they face.”

But critics say that Obama acted illegally when he granted amnesty to such a large group of people and that DACA should be phased out.

“Let them go back to Mexico with their skills. They’ve acquired a wonderful education in America. Go back and apply those skills in Mexico,” he said.

“Yes, there are kids who are caught up in this, and it’s awful. You think I don’t feel bad that there are American children who are starving? We are a country of finite resources.

“We can’t keep on incentivizing illegal immigration and wonder why illegal aliens keep showing up.”

The age cutoff for filing an application for DACA was 31 as of 2012, and Cutler is concerned about fraud. “Because there were no interviews and no field investigations, it is possible for illegal aliens who entered the United States well past their 16th birthdays to be able to game this process.”

Ultimately, DACA is temporary, and the pressure is going to land on Congress sooner or later.

That’s when a trade can come into play, said Mark Krikorian, executive director for the Center for Immigration Studies, a Washington think tank.

At a minimum, the administration should use amnesty for the DACA recipients as a bargaining chip for other immigration changes, he said in a January interview.

For example, DACA recipients could be given green cards, and in exchange, the administration could implement the mandatory use of e-verify, an internet-based system that allows businesses to look up the eligibility of their employees to work in the United States.

“If we’re amnestying three-quarters of a million people, we need to cut back on legal immigration to account for that,” he said. He suggests cutting the visa lottery and eliminating chain migration, including the visa categories that lead to “endless chains of immigration—one brother, and then another brother, and then the brother has a wife, and the wife has brothers and sisters, and they have parents, and so on,” he said.

When filed request, must have:
– Resided continuously in U.S. since June 15, 2007
– Arrived in U.S. before 16th birthday
– Been physically present in U.S.
– Met other education or service criteria

Although the vast majority of DACA recipients hail from Mexico, some come from countries as far flung as Pakistan and the Philippines. Nine percent are citizens of El Salvador, Honduras, or Guatemala.

45% = The portion of DACA recipients living in California or Texas. Rounding out the top five states are New York, Illinois, and Florida.