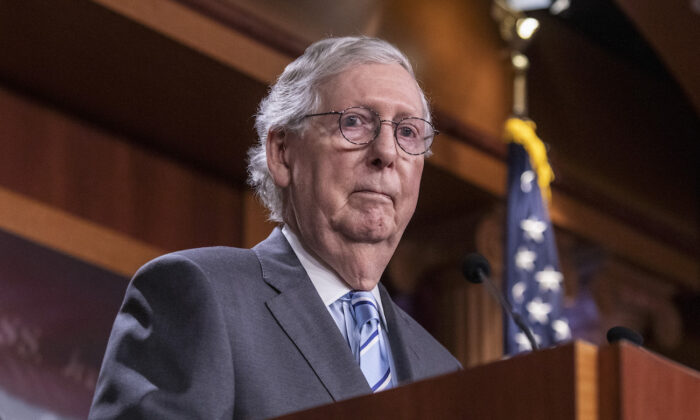 Trump-Backed Senate Candidates Have A ‘Good Chance of Winning’: McConnell

McConnell has long had an adversarial relationship with the former president. That rift has only grown further in recent years as McConnell has tried to turn the focus of this year’s midterms away from Trump and toward criticizing President Joe Biden’s policies.

McConnell told reporters in his home state of Kentucky that he had decided to host fundraisers for three prime contenders in battleground states: Dr. Mehmet Oz, who is running for the open Pennsylvania Senate seat, Herschel Walker, who is trying to take Sen. Raphael Warnock’s (D-Ga.) seat, and Rep. Ted Budd (R-N.C.), who is vying for the open North Carolina Senate seat.

McConnell explained that he had chosen to host the fundraiser for the Trump-backed nominees because they are “in critical states and [have] a good chance of winning.”

Absent from McConnell’s fundraising efforts are Trump-backed candidates Blake Masters of Arizona, who is competing for Sen. Mark Kelly’s (D-Ariz.) seat, and author J.D. Vance, who won the GOP nomination in Ohio after a drawn-out primary battle in a flooded field. The two identify most heavily with Trump’s populist approach to American politics, positions which may make McConnell skeptical of their chances of winning their seats.

These two may have been at the forefront of McConnell’s mind when he recently expressed concerns that “candidate quality” could jeopardize GOP chances of retaking the evenly divided Senate in November.

Despite general expectations that the GOP will reclaim the House after four years in the minority, the battle for the Senate is much tighter.

Because Democrats control Vice President Kamala Harris’ tie-breaking vote, they will retain the Senate even if they pick up no seats. Republicans, by contrast, will need at least a net gain of one seat to reclaim the Senate.

McConnell has long insisted on the importance of prioritizing electability over ideological purity.

During an interview with Punchbowl News on March 30, McConnell warned his party against electing candidates that were too radical for the states in which they were seeking election, and called for Republicans to emphasize the performance of Biden, whose popularity has dwindled over the past 12 months, over other considerations.

“This is gonna be a midterm report card on the performance of the president,” McConnell said. “The president’s approval rating is what’s gonna drive the fall election.”

According to Rasmussen’s daily presidential tracking poll, Biden’s approval rating as of Aug. 30 was 44 percent—four points lower than Trump’s at the same point in his presidency.

“One thing I think you can safely say going into the 2022 election is we’re gonna have a really good environment,” McConnell said.

“So, it leads to the second question, which is how could you screw this up?” McConnell quipped, citing polls showing between five- and 10-point leads for GOP candidates.

“You have to have electable nominees,” McConnell said, citing four Republicans—Christine O’Donnell, Sharon Engel, Todd Akin, and Richard Murdoch—who were unexpectedly victorious in past GOP primaries but were unable to win their respective general elections.

“So far, we’re moving into the primary season and I’m optimistic that we’re gonna have a fully electable nominee in every one of the places that will determine our majority.”

“I don’t have an ideological test—for example, how you feel about former President Trump is irrelevant,” McConnell said in a call for Trump to largely remain absent from the GOP angle moving into the midterms. “There are ways of measuring a credible candidate and that’s what I want. This is not an ideological litmus test or how you feel about the former president—it’s can you win in November.”