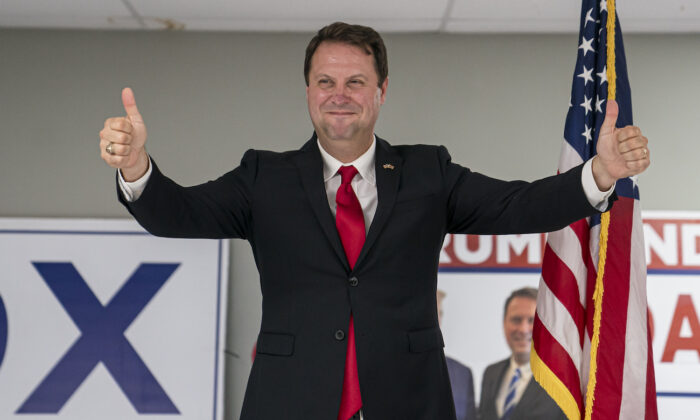 Cox, a conservative attorney endorsed by the former president, was declared the winner in his Republican gubernatorial primary race with former state Labor and Commerce Secretary Kelly Schulz two hours after the polls closed on July 19.

Schulz was backed by term-limited Republican Gov. Larry Hogan, who clashed with Trump often while he was in the White House, in a race most expected to be too close to call for days, if not weeks.

But the Trump–Hogan proxy primary proved to not be as competitive as anticipated, with Cox leading by 37,000 votes—56 percent—with 77 percent of the tally counted.

He also got a boost from the Democratic Governors Association, which spent more than $1 million on messaging directed at Republicans in support of Cox over the moderate Schulz.

The gambit is that Cox is too conservative to be successful in a general election in deep-blue Maryland.

Cox, 47, vows that, if elected, he would file legislation restricting abortions, banning mask and vaccine mandates, eliminating transgender rights, and authorizing a federal audit of 2020 elections.

Cox’s law firm sued Hogan over COVID-19 restrictions and represented a man who sued local officials for arresting him for not wearing a mask at a polling site.

He chartered buses for the Jan. 6, 2021, rally in Washington and, during the Capitol protest, called Vice President Mike Pence “a traitor” in a Twitter post he later deleted.

In March, Cox accused Hogan of malfeasance in office, theft of “the people’s liberty and property,” and “deprivation of the religious liberties of the people” in legislation to initiate impeachment proceedings. It was never heard.

In a July 12 statement, Trump wrote: “Dan Cox is doing a great job running for Governor of Maryland. He will bring dignity back to a State that is much more ‘red’ than anyone would ever know or believe. Dan will fight for our schools, our jobs, and our entire way of life. More importantly, Dan will end Larry Hogan’s terrible RINO reign by defeating his ‘Never Trump’ successor, another low-energy RINO, Kelly Schulz.”

Elected to the Maryland House in 2010, she was regarded as the “establishment candidate,” touting Republican “traditional values” and raising nearly three times the campaign contributions that Cox raised—sans the Democratic Governors Association’s $1 million assist.

Her campaign said Cox was “unstable” and “unfit for office,” citing Hogan’s 2021 claim that he’s a “QAnon whack job.” She maintained that Cox would be routed in a general election, noting Democratic groups were contributing to his campaign.

Projections indicated a far closer contest in the nine-candidate Democratic gubernatorial primary, where six candidates had raised more than $1 million in campaign cash. Polls pointed to a narrow race that was unlikely to be called for days, if not weeks.

But Moore, 43, identified by Winfrey a decade ago as having the “it” factor after writing a best-selling book, “The Other Wes Moore,” emerged early as a force on the campaign trail.

Winfrey also narrated a 30-second ad on Moore’s behalf, saying: “This moment that we’re in demands a different type of leader. For governor in Maryland, you have one in my friend Wes Moore.”

Raised by a widowed Jamaican-immigrant mother, Moore is first Black Rhodes scholar from Johns Hopkins University. As chief executive of the Robin Hood Foundation, he raised hundreds of millions of dollars to fight poverty.

Moore, in campaign addresses, insists that everyone deserves an equal opportunity to succeed, saying as a former Wall Street investment banker, he knows Maryland can become more competitive and more equitable so that “no one is left behind.”

His platform includes a plan to combat climate change in his first 100 days in office. He vows to protect abortion rights, close the racial wealth gap, and help older residents and retirees to stay in Maryland.

Moore tells voters that he and lieutenant governor running mate Aruna Miller, both children of immigrants, are the only ticket in either party’s primaries with legislative, executive, military, and nonprofit experience.

Perez, 60, served as director of the U.S Department of Justice Civil Rights Division from 2009 to 2013 and Labor Secretary from 2014 to 2016 in the Obama administration before leading the Democratic National Committee for several years.

Franchot, 74, a Vietnam War veteran who served in the Maryland Assembly for 20 years before being elected to four four-year terms as state comptroller, is a populist who describes himself as “an independent voice and strong fiscal watchdog” and “a real Democrat” who represents “the little fellers, not the Rockefellers.”