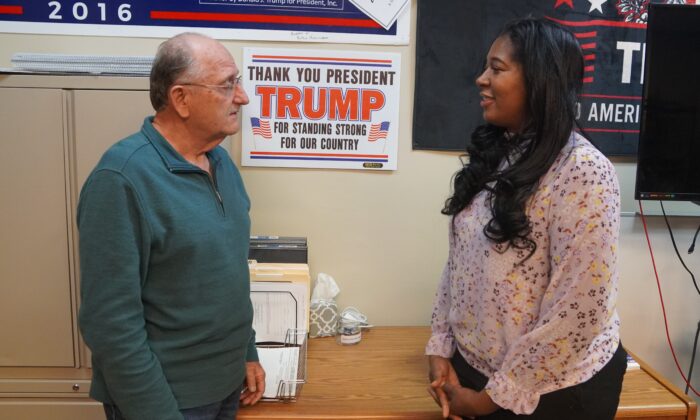 Shortly before the Grand Rapids gathering, Leonard released a list of 200 endorsements he received from establishment Republicans.

At the convention, Leonard was defeated by Matt DePerno, a private-sector constitutional lawyer from southwest Michigan who has never held public office.

In a three-way race, which included suburban-Detroit State Representative Ryan Berman, DePerno stunned political observers by garnering 49 percent of the vote to Leonard’s 40 percent on the first ballot.

The results necessitated a second ballot because convention rules require the winner to have at least 51 percent.

By the rules, Berman, who received 10 percent of the vote, was eliminated.

In the interval between the first and second ballots, Berman threw his support to Leonard and worked the floor to urge delegates to support Leonard in the runoff.

In the end, it was the pre-convention influence of DePerno’s main ally, Donald Trump, that brought him the victory.

For months Trump supporters have been showing up at county Republican committee meetings across the state—an effort that was not lost on the state party’s communications director Gus Portela.

Portela told The Epoch Times in an interview before the convention that local GOP meetings around Michigan have been packed out with new faces in anticipation of the convention and upcoming primary and general elections.

These local gatherings are usually hard to fill for both political parties.

Portela said the overflowing Republican meetings “speak volumes about our enthusiasm level that starts with the grassroots on up.”

Just before the convention, Trump lobbied delegates to vote for DePerno during a telephone town hall meeting held online.

Earlier this spring the former president hosted an event for DePerno at his Mar-a-Lago resort and traveled to Michigan to hold a rally for him and secretary of state candidate Kristina Karamo in Macomb County on April 2.

In recent weeks Trump repeatedly characterized the race for the GOP nomination for Michigan attorney general as one of the most important in the country.

Trump said the election of DePerno and Karamo was about ensuring the state of Michigan cannot be stolen from Republicans again.

When the second ballot was over, DePerno defeated Leonard 54 percent to 46 percent.

DePerno and Karamo came to Trump’s attention and gained statewide notoriety when they strongly called out irregularities in voting in Michigan shortly after the Nov. 3, 2020, election.

According to his campaign website, DePerno is advocating for election integrity and a comprehensive forensic audit of the state’s 2020 vote.

He has pledged to end Nessel’s lawsuit seeking to shut down an important pipeline, known as Enbridge Line Five, which brings Canadian petroleum to refineries in Ontario and Michigan.

With Trump’s help, Karamo, a college professor, won her race with 67 percent of the vote.

That performance earned her the right to challenge Democrat incumbent Secretary of State Jocelyn Benson in the November election.

Karamo defeated State Representative Beau LaFave. who received 19 percent, and township clerk Cindy Berry who got 13 percent of the vote.

She is currently a member of the Michigan Republican State Committee and was a poll watcher in the Detroit vote-counting center in November 2020, where she says she personally witnessed misconduct on the part of election officials.

Karamo told The Epoch Times before the convention that restoring integrity to Michigan’s elections and improving the handling of driver licensing and car registration will be her top priorities as secretary of state.

“We have to have absolute accuracy and transparency in our elections. I am fighting for the good of all Michiganders irrespective of political affiliation. The America we love is falling apart,” she said.

Expecting a tough and dirty campaign, Karamo said, “The fix is in to keep principled people out of elective office so the Democrats can maintain their power.

“I know they are trying to discredit my character because they can’t refute my policy positions.”

Responding to Karamo’s victory, Benson tweeted, “My opponent is more focused on peddling divisive fake conspiracies and lies than providing competent customer-service driven leadership. Not only will she undermine our democracy, she won’t focus on ensuring services are efficient and affordable.”

In a tweet after the convention, Nessel said, “Even I am at a loss for words at this ridiculous turn of events. Running the state of Michigan is a serious business and clearly, these are not serious or competent people.”

While earlier this month the Democrats conducted a hybrid convention—half in person, half virtual—in Detroit, more than 2,100 Michigan Republicans participated in person at their convention in Grand Rapids.

Among them was political operative and certified election inspector Jo DeMarco, who helped conduct the voting.

DeMarco told The Epoch Times in a phone interview, “The convention was a monumental success for conservative grassroots Republicans. I was thrilled, delighted, and honored to be a part of it.

“I only wonder why we have establishment versus the grassroots conflict in the Michigan GOP.

“The Democrats don’t do much right, but they really stick together. That’s the only thing that makes them successful,” she said.