The Blame Game: Weaponizing a Pandemic
0 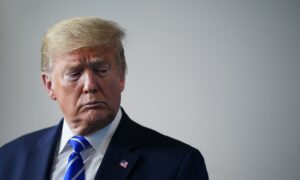 With Immigration Order, Trump Engages His Opponents on Fundamentals
0 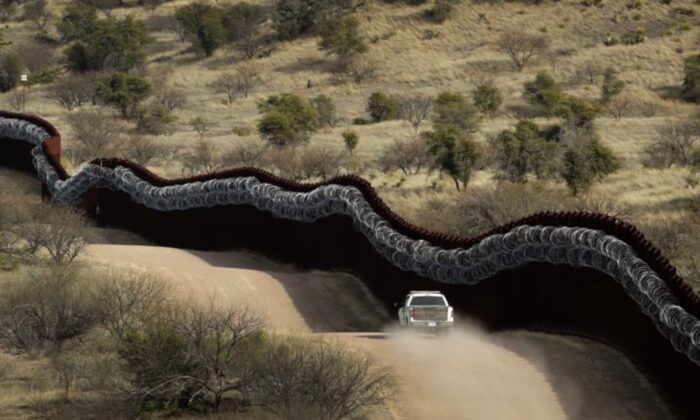 A Customs and Border Control agent patrolling on the U.S. side of a razor-wire-covered border wall along the Mexico east of Nogales, Ariz., on March 2, 2019. (Charlie Riedel/AP Photo)
Trump Presidency

President Donald Trump has awarded a North Dakota construction company a major $1.3 billion contract to build a portion of his signature wall along the U.S.-Mexico border.

In the largest contract to date for the border wall, Fisher Sand and Gravel Co. will construct a 42-mile section of the wall through “really tough terrain in the mountains” in Arizona, North Dakota Sen. Kevin Cramer confirmed Wednesday.

Cramer said the construction company offered the lowest price for the project, and that he did not know how many companies bid. It was awarded the contract on May 6.

The U.S. Army Corps of Engineers (USACE) said Wednesday that as part of the contract—dubbed Tucson Package 3—the company will construct a portion of the U.S.-Mexico border wall near Nogales and Sasabe in Arizona.

It added that start and completion dates for construction have not yet been set.

“Each project cost is contingent upon its unique characteristics such as geotechnical, topographical, hydrological and hydraulic, underground utilities, final real estate access, and the cost of materials and labor,” USACE spokesperson Raini Brunson told The Washington Post.

The contract presents “a series of projects within a geographical area with more complex terrain,” Brunson added.

Thanks to the strong and unwavering leadership of President @realDonaldTrump the U.S. has:

Trump has, as part of a significant 2016 campaign promise, said he will build 450 miles of wall along the border with Mexico by the end of the year. So far, the government has awarded millions of dollars in contracts for construction of 30-foot-tall barriers, along with new lighting, technology, and infrastructure.

An interactive webpage of the border wall which both tracks and streams footage of the progress being made on its construction, was launched by the Trump administration last month. The administration says that since January 2017 it has already built 187 miles of wall. Some of it is new, but most is replacing old, much shorter barriers that officials say were not sufficient.

This week, the head of the Customs and Border Protection (CBP) agency revealed that the border wall’s construction has remained a high priority during the CCP virus pandemic, and the barrier is going up faster than before.

Trump said last month that the wall could have an impact on stemming the spread of the CCP (Chinese Communist Party) virus, which causes the disease COVID-19, inside the United States.

“Now we have got to focus on drugs, and the drugs come in from different methods, and we have the best people at sea anywhere in the world, so we will have a tremendous impact on drugs,” the president said. “But one of the other things we will also have an impact, we think, on the coronavirus.”

Some activists supporting immigrant rights, however, said that the wall construction is a distraction amid the pandemic or could even, in some cases, facilitate the spread of the CCP virus.