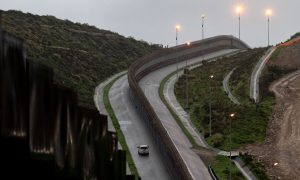 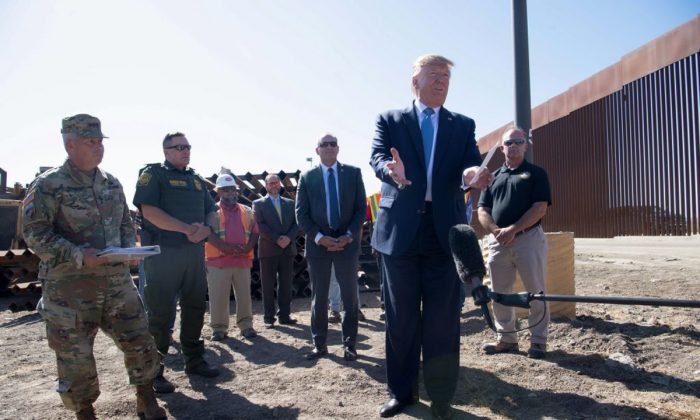 President Donald Trump signed one of the posts of the U.S.–Mexico border wall with a sharpie in Otay Mesa, California, on Sept. 18.

The president was visiting California for a fundraiser in Los Angeles, followed by a fundraiser in San Diego, and later visited the border wall on Wednesday. He autographed the wall with a sharpie and followed it with a press conference.

Trump applauded the building process and invited reporters to have a close look at the materials used for building the wall.

“If you think you’re gonna cut it with a blowtorch that doesn’t work because you hit concrete,” he said, adding that it is not possible to even cut through the concrete because it is reinforced with rebar.

The president described the features of the wall and said that “20 mountain climbers” attempted to climb the wall to check its effectiveness.

“This is the one that was hardest to climb… this wall can’t be climbed,” Trump said. He noted that the wall can absorb heat and that makes it more difficult to climb. “You can fry an egg on that wall,” he said.

Trump mentioned that three other nations are studying the border wall that is 30 feet high in some places and 18 feet in others.

“We think we can get it close to 500 miles” by next year “depending on terrain conditions,” he said.

Trump also called the wall a combination of technology and barrier. “Now we have a world-class security system at the border,” he said.

Later, while flying to the White House on Air Force One, a reporter asked Trump about what he signed on the wall.

On another occasion, Trump said that the border wall would be constructed at key places by the end of 2020.

“We’re building different sections simultaneously. And we think by the end of next year, which will be some time right after the election, actually—but we think we’re going to have close to 500 miles of the wall which will be complete,” Trump said on Sept. 4 while talking with reporters in the Oval Office.

The president said his administration is currently building or replacing “very large sections of the wall” and it is happening “rapidly.” His comments came a day after the Department of Defense said it was freeing up $3.6 billion in funds that was previously budgeted for other projects to build the wall.