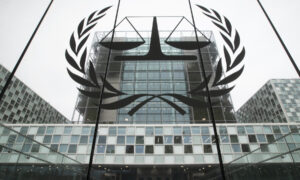 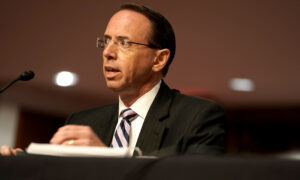 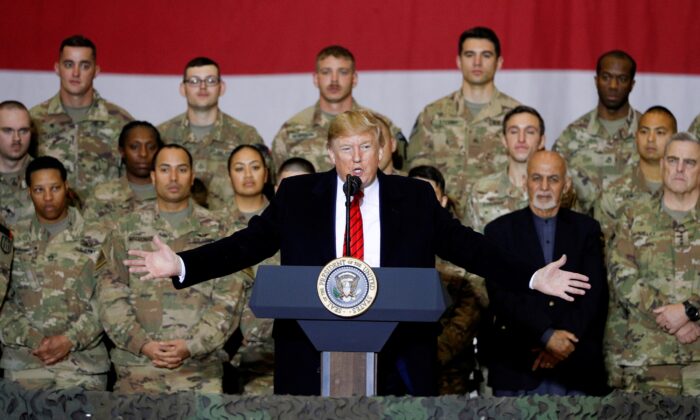 President Donald Trump delivers remarks to U.S. troops, with Afghanistan President Ashraf Ghani standing behind him, during an unannounced visit to Bagram Air Base, Afghanistan, on Nov. 28, 2019. (Tom Brenner/Reuters)
US News

Trump Authorizes Sanctions Against ICC Officials Over Probe of US Personnel

Trump issued an executive order on June 11 declaring a national emergency with respect to attempts by the ICC to assert authority over U.S. personnel without U.S. consent.

If Secretary of State Mike Pompeo determines that foreign persons are involved in such attempts, they’ll have their property and interests blocked by Treasury Department officials.

Attempts by ICC officials to probe American personnel is “inconsistent with fundamental principles of international law,” Esper said at a press conference in Washington on June 11, adding that the U.S. isn’t party to the Rome Statute, which created the ICC, nor have officials accepted that it has jurisdiction over U.S. personnel.

Intelligence indicates that enemies of the United States are encouraging attempts to prosecute American personnel, he said.

The ICC released a statement expressing “profound regret” at the U.S. actions, describing them as part of a series of “unprecedented attacks” on the court.

“The ICC stands firmly by its staff and officials and remains unwavering in its commitment to discharging, independently and impartially, the mandate bestowed upon it by the Rome Statute and the States that are party to it,” it said.

O-Gon Kwon, president of the body that provides oversight of the court, said the U.S. measures “undermine our common endeavor to fight impunity and to ensure accountability for mass atrocities.”

It was the first time the court had granted approval to investigate American forces.

“The many victims of atrocious crimes committed in the context of the conflict in Afghanistan deserve to finally have justice. Today, they are one step closer to that coveted outcome,” ICC prosecutor Fatou Bensouda said in a statement at the time.

She pledged to conduct an independent, impartial, and objective investigation.

“The International Criminal Court was established to provide accountability for war crimes, but in practice, it has been an unaccountable and ineffective international bureaucracy that targets and threatens United States personnel as well as personnel of our allies and partners,” she said.

Officials repeatedly alleged that the court is corrupt and hasn’t taken action to reform itself.

If ICC officials have information about alleged misconduct by U.S. personnel, they can submit the information to American authorities, Esper said.