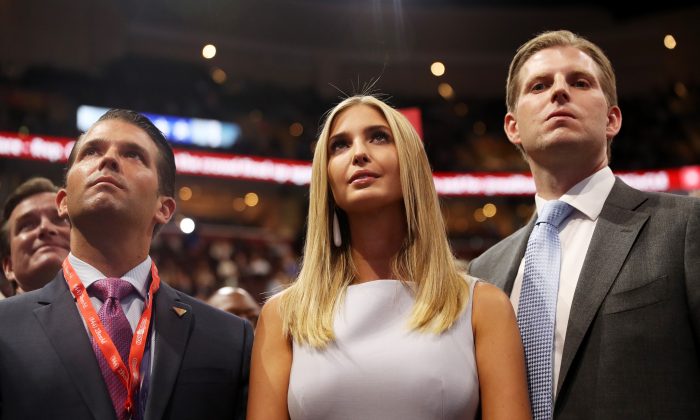 In a court filing Monday evening, lawyers for Trump and his two eldest children, Ivanka and Donald Trump Jr.., attempted to quash the subpoenas from Attorney General Letitia James’s office which seek testimony and documents as part of a lengthy civil investigation involving matters including “the valuation of properties owned or controlled” by Trump and his family business.

The pair have served as executives at Trump’s company, the Trump Organization.

Previously, James’s office had issued a subpoena to Trump seeking testimony and set a Jan. 7 deadline. Trump’s attorneys signaled that they would move to block the subpoena, while another one of his children, Eric Trump, provided testimony in late 2020 following a subpoena.

The subpoenas are “an unprecedented and unconstitutional maneuver,” lawyers for the Trumps wrote, accusing James of attempting to obtain testimony that could then be used against the Trumps in a parallel criminal investigation being overseen by Manhattan District Attorney Alvin Bragg.

James is seeking to “circumvent the entire grand jury process” and allowing their testimony would set a “dangerous precedent,” the lawyers argued.

They wrote that James seeks to nullify the Trumps’ rights by forcing them to testify without the immunity that’s guaranteed under state law if they were subpoenaed to testify in front of the grand jury in the criminal probe.

“This is a rather transparent gambit,” the lawyers argued on Monday. “By attempting to play both sides, Ms. James is in a position to cherry pick her investigatory methods—civil or criminal—in a calculated manner to, for example, leverage a Fifth Amendment assertion and obtain an adverse inference” in the civil probe.

The Trumps “might well be inclined to testify,” if it weren’t for a criminal probe, they added.

The New York attorney general, a Democrat, has spent more than two years looking at whether the Trump Organization misled banks or tax officials about the value of assets, allegedly inflating them to gain favorable loan terms or minimizing them to reap tax savings.

“Despite their names, they must play by the same rules as everyone else. These delay tactics will not stop us from following the facts or the law, which is why we will be asking the court to compel Donald Trump, Donald Trump Jr., and Ivanka Trump to testify with our office under oath,” James said in a statement after the attorneys for the Trumps moved to quash the subpoenas.

Alina Habba, an attorney for Trump and the Trump Organization, called the attorney general’s actions “a threat to our democracy,” adding that James “has weaponized her office through this political witch hunt,” The Washington Post reported.

James’s office will have two weeks to respond to the motion to quash the subpoenas and then the Trump lawyers will have time to reply, meaning a decision over the subpoenas is not expected for at least a month.

The Epoch Times has contacted James’s office and the Trump Organization for additional comment.