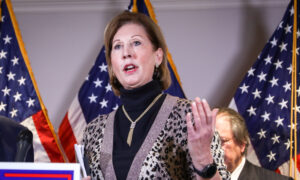 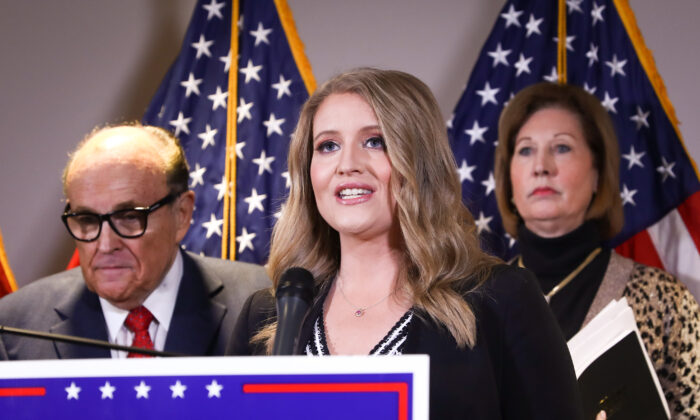 Trump campaign legal adviser Jenna Ellis on Monday suggested that Vice President Mike Pence could delay the certification of the Electoral College votes and ask the legislatures in six states where the results of the election have been contested which slate of electors should be selected.

Georgia, Pennsylvania, Michigan, Wisconsin, Arizona, and Nevada, are six key battle ground states where President Donald Trump’s campaign and other Republicans have contested the results of the presidential election, alleging that election fraud and irregularities took place on a large scale that swung the results to Biden.

The governors in these states had certified electors who cast their electoral votes for presidential candidate Joe Biden. But on Dec. 14, Republican electors in these six states and New Mexico cast alternate slates of Electoral College votes for Trump, setting up a “dueling electors” scenario not seen in U.S. elections for decades.

Ellis suggested on the Just the News program “The Water Cooler with David Brody” that Pence could ask the respective state legislatures of the six contested states which of the two slates of electors was in accordance with state law.

“[Pence] can ask that question to the states and say, ‘Well, legislators, you know, I have an oath to the Constitution to uphold the Constitution as written in Article II Section 1.2, which says the state legislatures direct the manner in which electoral delegates are selected. So you tell me which of these two slates was selected in the manner that your general assembly has designated,'” Ellis said.

“And that’s a fair question. That’s not exercising discretion. That’s not setting up any sort of bad precedent,” she added. “That’s actually returning the authority to the constitutionally protected entity and just simply directing that question I think would then require a response from these very committed, to put it lightly, state legislators that haven’t been willing to act, and it would in fact then give a very clean outcome to this election.”

Article II, Section 1.2 of the U.S. Constitution says, “The Constitution provides that each state is to decide, for itself, how its electors will be chosen.”

Pence is due to preside over a joint session of Congress on Jan. 6 for the formal certification of states’ electoral votes for the president of the United States. On Monday, he said that Trump and Republicans will “have our day in Congress.”

“I know we all got our doubts about the last election. … I promise you, come this Wednesday, we’ll have our day in Congress. We’ll hear the objections. We’ll hear the evidence, but tomorrow is Georgia’s day,” he told a crowd in Georgia while campaigning for Sen. Kelly Loeffler (R-Ga.) and David Perdue ahead of the state’s Senate runoffs on Tuesday.

On Jan. 2, Pence’s chief of staff, Marc Short, said in a statement that the vice president “welcomes the efforts of members of the House and Senate to use the authority they have under the law to raise objections and bring forward evidence before the Congress and the American people on January 6th,” and that he “shares the concerns of millions of Americans about voter fraud and irregularities in the last election.”

Objections during the joint session must be made in writing by at least one House member and one senator to sustain a challenge. If the objection for any state meets this requirement, the joint session pauses and each house withdraws to its own chamber to debate the question for a maximum of two hours. The House and the Senate then vote separately to accept or reject the objection, which requires a majority vote from both chambers.

Rep. Louie Gohmert (R-Texas) said in a court filing (pdf) on Jan. 1 that he and 140 Republicans in the House plan to object. Meanwhile, Sen. Kelly Loeffler (R-Ga.), Sen. Josh Hawley (R-Mo.), and a group of 11 Republican senators led by Sen. Ted Cruz (R-Texas) have said they would object to the counting of electors that the states’ governors have certified for Biden.

If both Trump and Biden receive less than 270 electoral votes on Jan. 6, then a contingent election is triggered in which each state’s delegation in the U.S. House of Representatives casts one en bloc vote to determine the president, while the vice president is decided by a vote in the U.S. Senate.

There have been calls for Pence to reject electoral votes from the contested states. A judge on Jan. 1 rejected a lawsuit filed by Rep. Gohmert and other Republicans against Pence requesting that the court grant the vice president “the exclusive authority and sole discretion in determining which electoral votes to count for a given State” on Jan. 6.

The power of the vice president to count or reject electoral votes is disputed.