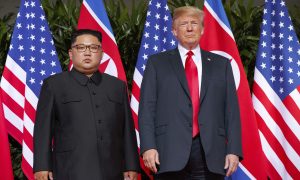 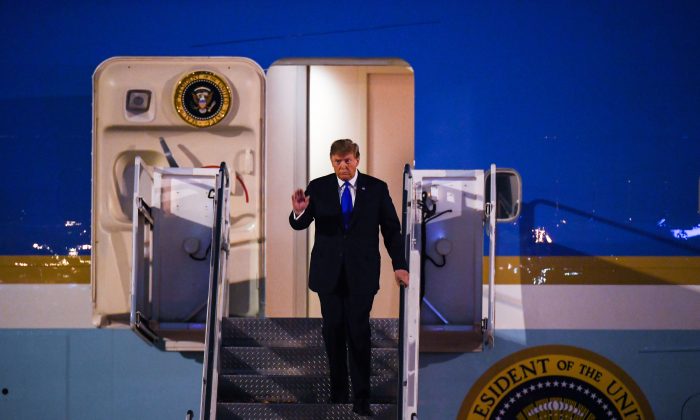 Trump Arrives in Vietnam for Second Summit With Kim

HANOI, Vietnam—President Donald Trump arrived in Vietnam on Feb. 26 ahead of his second historic summit with North Korean leader Kim Jong Un. After an about 20-hour flight, Trump arrived to a red-carpet welcome at 8:55 p.m. local time at Hanoi’s International Airport.

Following the 2018 summit in Singapore, Trump and Kim will meet for the second time on Feb. 27 and 28 in Vietnam’s capital, Hanoi.

The United States expects significant movement by the North Korean leader in implementing last year’s agreement. Ahead of the summit, a White House senior official said the president’s “overriding goal” with this summit would be the denuclearization of the Korean Peninsula.

The summit will also seek to form “a shared understanding of what denuclearization is,” according to the White House.

After a two-and-a-half-day journey by train, Kim arrived on Feb. 26 at 8:15 a.m. local time in the Vietnamese town of Dong Dang after crossing over the border from China. He later continued by a Mercedes-Benz vehicle for the 105-mile trip to Hanoi.

The meeting in Singapore in June 2018 produced a joint statement that was signed by both Trump and Kim. As part of the agreement, Kim pledged to work toward complete denuclearization of the Korean Peninsula. Other pillars of the agreement were: transforming relations between the United States and North Korea, establishing a permanent peace regime on the Korean Peninsula, and the return of POW/MIA remains from the Korean War.

At the two-day summit, Trump also looks to talk with Kim about the economic future that North Koreans could enjoy if Kim follows through on his pledges about denuclearization.

“I think we’ll have a very tremendous summit,” Trump said on Feb. 25 in an address to nation’s governors at the White House. “We want denuclearization, and I think he’ll have a country that will set a lot of records for speed in terms of an economy.”

After emerging from decades-long international isolation in the early 1990s, Vietnam now hosts the high-stakes peace talks. As a communist country, Vietnam shares some similarities with North Korea and is seen as a potential model for North Korea, due to its improved relations with the United States and its successful economic reforms.

Vietnam was very well positioned to host this summit, according to Pham Quang Vinh, former Vietnamese deputy minister of Foreign Affairs and former ambassador to the United States.

“In the process of negotiation, both the United States and North Korea laid out some requirements,” he said in an interview with Zing, a local online newspaper. “They really wanted a place with a favorable environment for both sides—preferably a country that has diplomatic relations with both.”

On the first day of the summit, Trump will hold a bilateral meeting with Nguyen Phu Trong, Vietnam’s new president. He will then have a working lunch with Vietnamese Prime Minister Nguyen Xuan Phuc, according to the White House.

In the evening, Trump will meet Kim for a brief one-on-one conversation, followed by a social dinner, at which both leaders will each be accompanied by two guests and interpreters, White House press secretary Sarah Sanders told reporters on Air Force One.

She said there would be more meetings between the two leaders on the second day of the summit.

Last year’s summit in Singapore brought about a dramatic turn in relations between the two countries.

Early in Trump’s presidency, the communist regime’s dictator, Kim, tested several missiles allegedly capable of reaching the United States. With the growing nuclear threat, there was talk of war with Pyongyang.

Trump responded with firm threats of military action, saying that the threats against the United States would be “met with fire and fury like the world has never seen.”

The Trump administration also launched a maximum pressure campaign in 2017 through economic sanctions, which was almost entirely enforced with the help of Beijing. As a result, Pyongyang stopped testing nuclear weapons and ballistic missiles.

During his meeting with the governors, Trump touted Chinese leader Xi Jinping for playing a crucial role in North Korea talks.

“I have to really thank President Xi,” Trump said. “As you know, about 92 percent of the goods going into North Korea go through China. And President Xi has been very good.”

Trump announced Feb. 24 that he would hold off implementing a planned tariff hike on $200 billion worth of Chinese goods. He cited “substantial progress” in trade talks with the Chinese delegation in Washington last week.

Washington still maintains a tough sanctions regime against Pyongyang. Kim has urged Washington to drop sanctions ahead of denuclearization activities. It’s unclear whether Trump will offer Kim any immediate sanctions relief at the second summit.

“There is need to explain to North Korea the terms of bilateral U.S. sanctions,” said Roberta Cohen, co-chair emeritus at the Committee for Human Rights in North Korea, at an event hosted by the Center for Strategic and International Studies in Washington on Feb. 22.

“Under U.S. law, sanctions can be lifted not only for denuclearization steps but for human-rights improvements. And the law sets forth what these steps are, and it includes release of political prisoners,” Cohen said, adding that human rights should be “part of the equation.”