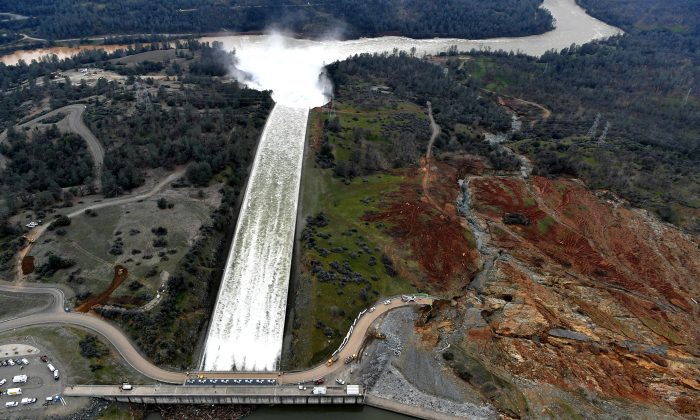 The Oroville Dam spillway releases 100,000 cubic feet of water per second down the main spillway in Oroville, California on Feb. 13, 2017. (JOSH EDELSON/AFP/Getty Images)
US

“The federal aid will get money and resources where it’s needed most,” Brown said in a statement, which came after White House Press Secretary Sean Spicer said he’s “keeping a close eye on the Oroville Dam situation.”

“The situation is a textbook example of why we need to pursue a major infrastructure package in Congress,” Spicer said at a daily briefing on Feb. 14. “Dams, bridges, roads, and all ports around the country have fallen into disrepair. In order to prevent the next disaster we will pursue the president’s vision for an overhaul of our nation’s crumbling infrastructure.”

Officials evacuated some 200,000 residents around Oroville’s dam, amid fears that the dam would fail and flood the region.

On Wednesday, the residents were allowed to return home but were warned by authorities to stay alert.

Spicer added: “We hope everyone remains safe as the evacuations continue, and we’ll be working alongside with FEMA and appropriate government entities to make sure that we are doing everything we can to attend to this matter.”

Crews, meanwhile, worked on Tuesday night to Wednesday morning to fortify the dam’s spillway at Lake Oroville, the Sacramento Bee reported. They’re currently racing against the clock before more rain slated to approach the region arrives.

“We continue to armor up the hillside,” said Chris Orrock, a Department of Water Resources spokesman. “That is our main concern.”