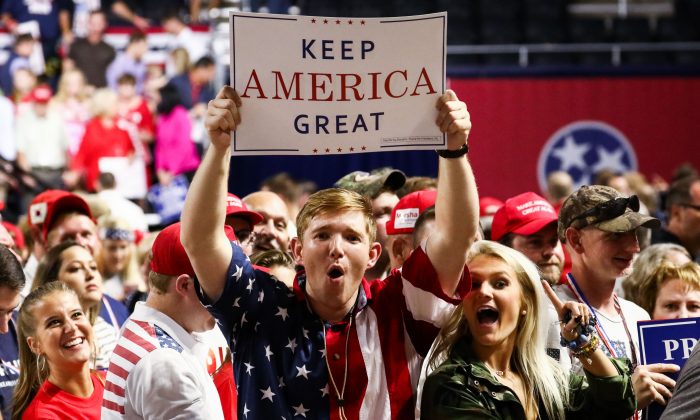 Half of likely American voters approve of how President Donald Trump is handling his job, according to an Oct. 4 Rasmussen poll.

In Rasmussen’s daily polling, Trump hasn’t hit 50 percent approval since Aug. 14; his high-water mark was 59 percent on Jan. 26, 2017, several days after his inauguration.

In the latest poll, 37 percent of likely voters approved of Trump strongly, while 40 percent strongly disapproved.

“Working hard, thank you!” Trump commented in a Facebook post sporting a picture with “50%” in large font.

The poll is based on a telephone survey of 1,500 likely voters conducted on Oct. 1-3; it has a margin of error of 2.5 percentage points.

While Rasmussen consistently posts results more favorable to Republicans than other pollsters, it was also the most accurate in predicting the outcome of the 2016 presidential election.

Trump has worked intensely to energize his base ahead of the upcoming midterm elections. He held three rallies in four days from Sept. 29 to Oct. 2—one in Ohio, two in Tennessee, and has more planned for Rochester, Minnesota; Topeka, Kansas; Council Bluffs, Iowa; and Erie, Pennsylvania.

Republicans depend on keeping majorities in both the House and Senate to keep rolling out Trump’s agenda.

Including two special elections, there will be 35 Senate seats up for grabs come Election Day on Nov. 6. Of those, 23 are currently held by Democrats and two by independents—Bernie Sanders and Angus King, who are allied with Democrats. Republicans currently only hold eight seats.

Republicans are now feeling just as pumped about the midterms as Democrats, according to an NPR/PBS NewsHour/Marist Poll (pdf). In July, 68 percent of Republicans considered the elections “very important” compared to 78 percent of Democrats. In the Oct. 1 poll, the gap narrowed to 80 percent Republican versus 82 percent Democrat.

“On November 6, you will head to the polls, hopefully, in one of the most important Congressional elections of our lifetime,” Trump said Oct. 2 at the Southaven, Miss., rally.

“The only reason to vote Democrat is if you are tired of winning.”