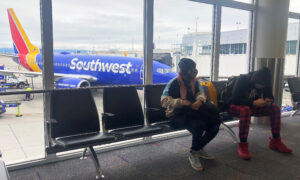 Two appointees from the waning days of the Trump administration are suing the U.S. Department of Education for refusing to deliver their signed presidential commissions, citing the seminal 218-year-old Supreme Court precedent that created judicial review.

The 18-page legal complaint in the case, known as Hanke v. Cardona, was filed with the U.S. District Court for the District of Columbia on July 15. Miguel Cardona is secretary of the U.S. Department of Education. The lawsuit was filed by Sacramento, California-based Pacific Legal Foundation (PLF), a national public interest law firm.

One plaintiff is Steve Hanke, a professor of applied economics at Johns Hopkins University in Baltimore, Maryland. The other plaintiff is John Yoo, the Emanuel S. Heller Professor of Law at the University of California, Berkeley. In December 2020, then-President Donald Trump signed both of their commissions for the National Board for Education Sciences (NBES)—an independent board that advises officials within the department on research and funding priorities.

The board also performs an oversight function, advising the director of the Institute for Education Sciences—an independent, nonpartisan arm of the department that evaluates and provides funding for education research.

The Education Sciences Reform Act requires that the board meet at least three times a year and produce an oversight report to both Congress and the secretary of education. The report is due annually on July 1—yet the department, now under the control of the Biden administration, refuses to call a meeting.

The department also refuses to deliver the appointees’ signed commissions, which are proof of their valid appointments.

The plaintiffs argue that even though the commissions were not delivered to the presidential appointees, those appointees have what lawyers call a vested legal right to the delivery of their commissions even after the election of a new president.

This principle was included in the Supreme Court’s ruling in Marbury v. Madison (1803), which established the principle of judicial review, which is the power of federal courts to declare legislative and executive acts unconstitutional.

In that case, President John Adams named William Marbury of Maryland as one of 42 justices of the peace on March 2, 1801. The U.S. Senate confirmed the nominations of the “midnight judges,” as critics called them, on the following day, which was Adams’s last full day in office. Marbury’s commission as a justice of the peace for the District of Columbia failed to be delivered before Adams left office and when Thomas Jefferson became president March 4, he ordered that the commission not be delivered. Marbury sued Jefferson’s secretary of state, James Madison, to compel the delivery of the commission.

The Supreme Court held that even though Madison’s refusal to deliver the commission was unlawful, he could not be ordered to provide it to Marbury because the provision of the Judiciary Act of 1789 that allowed Marbury to put the legal dispute before the high court was itself unconstitutional given that it purported to extend the court’s original jurisdiction beyond what the Constitution allowed.

After Trump signed the commissions for Hanke and Yoo, the White House Office of Presidential Personnel directed the department to begin “onboarding” the new appointees, and the men had to complete some additional paperwork, PLF attorney Jessica Thompson told The Epoch Times in an interview.

The two men were in communication with the Department of Education about the paperwork when the Trump administration was in power and after the Biden administration took office, she said.

However, once they started asking the Biden-controlled agency for their commissions to be delivered or even offering to pick them up, “responses from the Department of Education stopped flowing [and] they started to be ignored.”

Hanke and Yoo “have been deprived of their opportunity to fulfill their statutorily required duties to meet and perform their oversight investigations and produce that oversight report,” she said.

Thompson declined to speculate on what the Biden administration’s motives may be for slow-walking her clients’ appointments, but said the administration must be held to account for failing to act.

“I would say that the president can remove appointees who have yet to complete their term, but in doing so must be held politically accountable for that decision,” she said.

Even though in the end Marbury failed to receive his commission, the 1803 precedent is still relevant to the new lawsuit, Thompson said.

Although the Judiciary Act of 1789 was struck down as unconstitutional, since then other acts have been passed, including the Administrative Procedure Act, under which her clients have a valid claim, she added.

“So you can bring claims when agencies fail to act under a lawful duty to compel them to do those actions,” Thompson told The Epoch Times.

“And so the holding that we are affirming from Marbury v. Madison is that the first step there that Chief Justice John Marshall took was to say, ‘Marbury, you do, in fact, have a legal right to your commission.’ And so, once the president signs the commission, it properly belongs to that appointee.”

The Epoch Times reached out to the Department of Education for comments but did not immediately receive a reply.