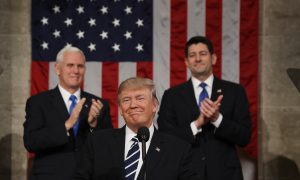 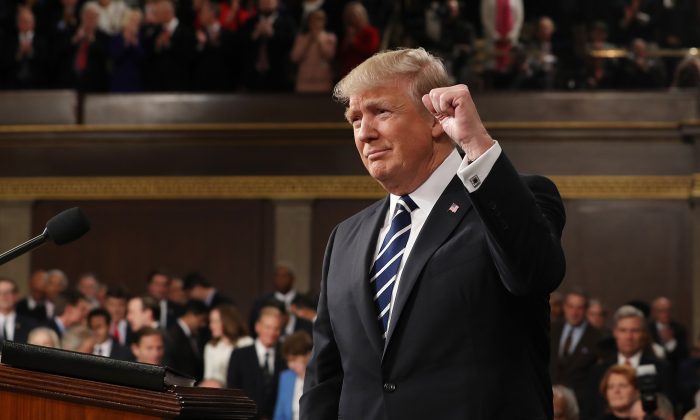 President Donald Trump arrives to deliver an address to a joint session of the U.S. Congress in the House chamber of the U.S. Capitol in Washington on Feb. 28, 2017. (Jim Lo Scalzo - Pool/Getty Images)
Politics

Forty days into his presidency, President Donald Trump arrived Tuesday night to cheers and applause, to address a special joint session of Congress.

Starting out with a message of hope for a divided nation by marking the conclusion of Black History Month, Trump set the tone of a speech that would ultimately be one calling for unity.

“I am here tonight to deliver a message of unity and strength, and it is a message deeply delivered from my heart,” he said.

He began by addressing the recent targeting of Jewish community centers and vandalism of Jewish cemeteries, as well as a shooting in Kansas City last week, as a reminder “that while we may be a nation divided on policies, we are a country that stands united in condemning hate and evil in all of its very ugly forms.”

The opening received great applause from both sides of the aisle. However, for the bulk of the rest of his speech the response was mainly along partisan lines, with a near-constant standing ovation from Republicans, and Democrats mostly subdued.

Trump talked about a wave of optimism and “national pride” growing in Americans, ushering in a “new chapter of American greatness.”

“What we are witnessing today is the renewal of the American spirit,” he said.

“In nine years, the United States will celebrate the 250th anniversary of our founding—250 years since the day we declared our independence. It will be one of the great milestones in the history of the world. But what will America look like as we reach our 250th year? What kind of country will we leave for our children?”

From Nation Building to Rebuilding the Nation

The president launched into the “mistakes of recent decades,” saying he will not allow them “to define the course of our future.” He talked about America’s nation building abroad, financing “one global project after another,” while ignoring America’s own inner cities.

“We’ve defended the borders of other nations,” he said, “while leaving our own borders wide open, for anyone to cross—and for drugs to pour in at a now unprecedented rate.”

Trump painted a picture of building frustration over recent years of Americans crying out to be heard over globalist policies, saying that “America must put its own citizens first … because only then, can we truly make America great again.”

Later, Trump expressed strong support for NATO, but emphasized that other members must pay their fair share, which they are starting to now do after some frank discussions, he said

In talking about foreign policy, he highlighted the call for peace and learning from past mistakes, particularly the ravages of war and destruction.

“We want peace, wherever peace can be found. America is friends today with former enemies. Some of our closest allies, decades ago, fought on the opposite side of these World Wars. This history should give us all faith in the possibilities for a better world.”

He noted the stock market’s record-setting gains since Nov. 8, and promised billions in savings for taxpayers through slimming down the government and freezing hiring of “non-military and non-essential federal workers.”

He talked about progress on various fronts to reduce barriers that fetter job creation.

“We have undertaken a historic effort to massively reduce job‑crushing regulations, creating a deregulation task force inside of every government agency,” he said, which will impose his new mandate to eliminate two regulations for every new one created. This will help untie government and industry, including regulations against the coal industry.

Similarly, Trump mentioned clearing the way for the completion of the Keystone and Dakota Access pipelines—using American steel, and creating American jobs.

He noted withdrawing the United States from what he called the “job-killing” Trans-Pacific Partnership.

In aid of women, Trump mentioned Canadian Prime Minister Justin Trudeau’s visit, and an agreement to form a council between the two nations to help female entrepreneurs.

Finally, regarding his promises to address corruption in DC, he stated: “We have begun to drain the swamp of government corruption by imposing a five-year ban on lobbying by executive branch officials—and a lifetime ban on becoming lobbyists for a foreign government.”

Addressing his key campaign theme of law and order, Trump said he has created a Task Force on Reducing Violent Crime, and is pursuing an “aggressive strategy to dismantle the criminal cartels,” across the nation.

He aims to “stop the drugs from pouring into our country and poisoning our youth” and will expand treatment for addicts.

Trump said “we must work with—not against—the men and women of law enforcement,” putting emphasis on building trust and cooperation between police and the community.

In what he described as an answer to “the pleas of the American people for immigration enforcement and border security,” Trump said his administration is “finally enforcing immigration laws.” This will help raise wages, save billions of dollars, and make communities safer, he said.

He then segued into his signature campaign promise—the construction of a wall along the southern border—which he said would be an “effective weapon against drugs and crime.”

From there, Trump talked about swiftly removing gang members, drug dealers, and criminals. “Bad ones are going out as I speak tonight and as I have promised.”

Trump then paused to pose a question to his critics in Congress: “What would you say to the American family that loses their job, their income, or a loved one, because America refused to uphold its laws and defend its borders?”

“Our obligation is to serve, protect, and defend the citizens of the United States,” he said.

Trump made the case that stronger vetting is needed to prevent the nation from becoming a sanctuary for extremists.

Citing the Department of Justice, he said data shows that “the vast majority of individuals convicted for terrorism-related offenses since 9/11 came here from outside of our country.”

“It is not compassionate, but reckless, to allow uncontrolled entry from places where proper vetting cannot occur. Those given the high honor of admission to the United States should support this country and love its people and its values,” he said.

He said he’s been working with friends and allies in the Muslim world to develop a plan to destroy ISIS, “to extinguish this vile enemy from our planet.”

He said he’s also imposed new sanctions on those “who support Iran’s ballistic missile program,” while reaffirming an “unbreakable alliance” with Israel.

Trump reiterated his usual talking points on the repeal and replacement of Obamacare, promising to lower the cost of healthcare while expanding choice, even across state lines.

“Mandating every American to buy government-approved health insurance was never the right solution for America.”

Addressing choice in another arena, he called on both parties to pass an education bill to fund school choice for disadvantaged youth. “These families should be free to choose the public, private, charter, magnet, religious or home school that is right for them.”

Perhaps the least partisan topic of the evening was support for the military, which received unanimous applause.

“Our veterans have delivered for this Nation—and now we must deliver for them,” he said.

To keep America safe, the military must be supplied with the tools they need to either prevent war, or if they must fight, fight to win, he said.

Trump painted a grim picture of current circumstances—including 94 million Americans out of work, and over 43 million in poverty—yet expressed great optimism for the future if the parties can work together.

Working together, past the differences of party, Trump said, “will require us to tap into the American spirit that has overcome every challenge throughout our long and storied history.”

“If we are guided by the well-being of American citizens then I believe Republicans and Democrats can work together to achieve an outcome that has eluded our country for decades.”

Recalling the opening of his speech and America’s approaching 250th anniversary, Trump invited lawmakers to imagine what could be achieved “if we simply set free the dreams of our people,” he said.

“But we can only get there together. We are one people, with one destiny. … The time for small thinking is over. The time for trivial fights is behind us. We just need the courage to share the dreams that fill our hearts,” he said.

And to the people of the nation he urged them all as well: “Believe in yourselves. Believe in your future. And believe, once more, in America.”