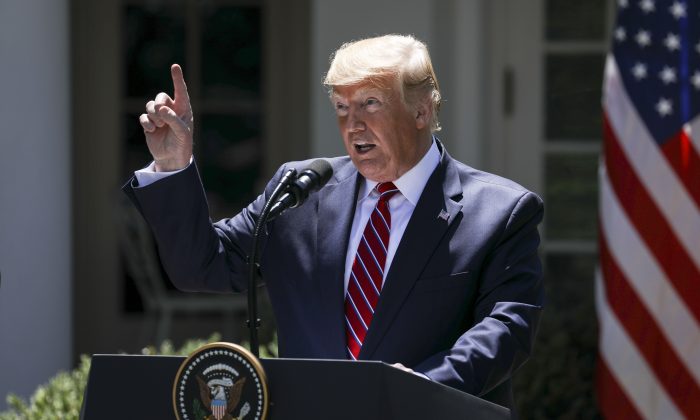 Trump: ‘AOC Plus 3 Are a Nightmare for America!’

President Donald Trump continued his criticism of several progressive Democratic congresswomen who he is publicly feuding with, calling Rep. Alexandria Ocasio-Cortez (D-N.Y.) and her so-called “squad” a “nightmare for America.”

Trump took to Twitter on July 23 to again call out Rep. Ilhan Omar for (D-Minn.) her past anti-semitic rhetoric, claiming that she will be the reason he will win Minnesota during the 2020 elections.

“In 2016 I almost won Minnesota,” Trump wrote on Twitter. “In 2020, because of America hating anti-Semite Rep. Omar, & the fact that Minnesota is having its best economic year ever, I will win the State! ‘We are going to be a nightmare to the President,’ she [says.]”

In 2016 I almost won Minnesota. In 2020, because of America hating anti-Semite Rep. Omar, & the fact that Minnesota is having its best economic year ever, I will win the State! “We are going to be a nightmare to the President,” she say. No, AOC Plus 3 are a Nightmare for America!

“No, AOC Plus 3 are a Nightmare for America!” he added.

Trump accused the four freshman congresswomen of being anti-semitic and anti-American in a series of posts where he most notably called on “‘progressive’ Democrat Congresswomen” to “go back” to their countries to help fix the “totally broken and crime-infested places” before returning to the United States to “show us how it is done.” Apart from Omar, who was born in Somalia, the other three far-left congresswomen were born in the United States.

The president continued his criticism for the freshman congresswomen during his speech at Turning Point USA’s Teen Student Action Summit at Washington on July 23, this time targeting Tlaib for her conduct in a recently resurfaced video that showed her shouting at one of then-candidate Trump’s campaign speeches in 2016.

“I watched just this morning, this Tlaib from Michigan,” he said. “There’s no way she stands for the values of the people of Michigan but I watched her this morning she’s vicious, she’s like a crazed lunatic. … She’s screaming like a total lunatic at one of our rallies,” Trump said.

,@realDonaldTrump on Rashida Tlaib: There’s no way she stands for the values of Michigan pic.twitter.com/bLZAEZsvTx

“This is not a sane person, folks, when you look at that, and this is what we’re up against,” he continued. “The Democrats, I guess, are forced to embrace her, and I call it AOC plus three.”

Many of Trump’s opponents denounced his comments, labeling the president a racist. But Rich Valdes, the associate producer of the Mark Levin Show and a potential GOP challenger against Ocasio-Cortez, said he thinks Democrats and progressives are using the term in order to further their political narratives.

“Well I think the president could say anything and I think they would respond with an assault on him saying that he’s a racist,” Valdes told The Epoch Times, “that is in recent years that has become the go-to response to any argument whether it’s you know we don’t think that climate change is causing this or we think lowering taxes will create more revenue.”

Valdes, who is also the host of the podcast “This is America,” said he supports the president for calling out the progressive congresswomen for spreading, what Trump claims, anti-semitic and anti-American rhetoric but also said he didn’t think it was the best word choice.

“The moral of what he was saying obviously was if you don’t like America you should leave and I stand by that and I think that’s always been true in this country is we’ve always had that freedom and liberty to do that,” he said.

“I just think that while it’s not a requirement that we love our country I do think that serving in Congress and serving in any public office for that matter is an act of patriotism,” he added. “And I think with that being said, being a patriot entails loving your country [and] pledging allegiance to your country.”