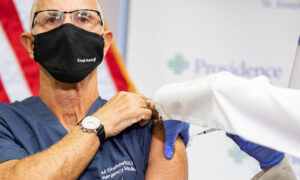 President Donald Trump said asylum-seekers will have to “lawfully present themselves” at a U.S. port of entry, in remarks that addressed what he called a “crisis at the southern border.”

“Migrants seeking asylum will have to present themselves lawfully at a port of entry,” Trump told reporters in the Roosevelt Room at the White House on Nov. 1. “Those who choose to break our laws and enter illegally will no longer be able to use meritless claims to gain automatic admission into our country.”

The executive order on immigration will be issued next week, Trump said.

Trump has ordered the deployment of thousands of American troops to the U.S.-Mexico border ahead of a thousands-strong caravan of migrants that is heading north from Central America, and is currently in Mexico. The migrants, from El Salvador, Guatemala, and Honduras, have declared that they will seek entry into the United States.

“These illegal caravans will not be allowed into the United States and they should turn back now,” Trump said. “We are stopping people at the border. This is an invasion.”

The president on Oct. 31 indicated that 15,000 troops could be sent to the border. “We’ll go up to anywhere between 10 and 15,000 military personnel—on top of Border Patrol, ICE and everybody else at the border,” Trump said.

In addition, the president said he would seek to do away with the automatic right of citizenship for U.S.-born children of noncitizens and illegal immigrants, saying he plans to issue an executive order on it. He and other Republicans say there’s a loophole in the law that incentivizes people to come illegally into the United States to have children.

Trump also issued a warning to people traveling in the migrant caravan, saying that people who throw rocks at authorities will be treated like those holding a firearm.

The migrant caravan poses a serious threat to the sovereignty of the nation’s borders, Trump said.

“If these caravans are allowed into our country, only bigger and more emboldened caravans will follow … and you see that’s what’s happening now,” Trump said.