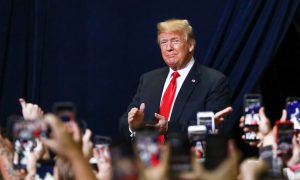 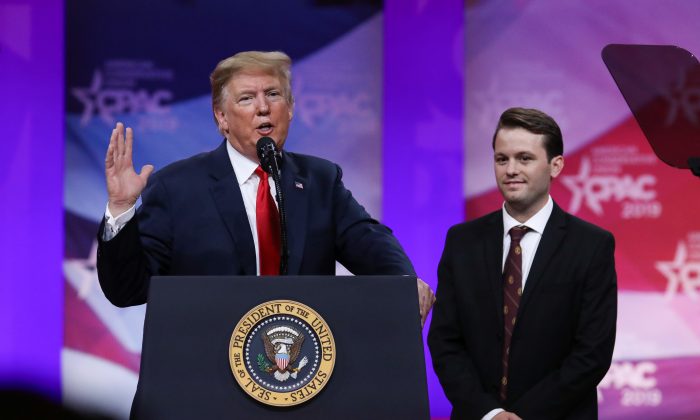 In a speech that went past two hours at the Conservative Political Action Conference (CPAC 2019), President Trump invited Hayden Williams—the conservative activist who was assaulted last month at the University of California in Berkeley—on stage and said he will soon sign an executive order protecting free speech on college campuses.

“Today, I am proud to announce that I will be very soon signing an executive order requiring colleges and universities to support free speech if they want federal research funds,” he announced to enthusiastic applause.

“If they want our dollars and we give it to them by the billions, they’ve got to allow people like Hayden and many other great young people and old people to speak. Free speech,” said Trump. “And if they don’t it will be very costly.”

“He will be a wealthy man,” Trump said while sending Williams off the stage.

According to the Conservative Political Action, 19,252 people attended the conference with 2,604 students among them.

"Ladies and gentlemen, he took a hard punch in the face for all of us." Donald J. Trump said about conservative activist, Hayden Williams, who got attacked on Berkeley campus

Trump hugged the American flag as he arrived to speak at CPAC 2019, in Oxon Hill, Md., on Saturday, March 2.

He went through a wide range of topics, from Robert Mueller’s investigation, economic success, border wall, trade negotiation with China, and freedom of speech.

Trump also took a humorous jab at the Democrats’ Green New Deal, a policy proposal floated by some of the more liberal Democrats in Congress and backed to varying degrees by several of the party’s 2020 presidential candidates.

“Perhaps nothing is more extreme than the Democrat plan to takeover over American energy.

“Their plan would remove every gas-powered car from American roads.

“They want you to have one car instead of two… pic.twitter.com/HKU6oMm7Q3

“I think the New Green Deal or whatever the hell they call it — the Green New Deal — I encourage it,” Trump said with a smirk.

“I think it’s really something that they should promote. They should work hard on it. … No planes, no energy. When the wind stops blowing that’s the end of your electric. Let’s hurry up. Darling, is the wind blowing today? I’d like to watch television, darling.”

With special counsel Robert Mueller’s Russia investigation seemingly approaching its end, Trump spoke of the “collusion delusion” and lashed out at newly empowered House Democrats who plan to open new inquires involving him.

“Now you have a president who is standing up for America. After decades of building up foreign nations, we are finally building up our nation and we are doing it with American hands, American grit, and with beautiful beautiful American steel” – @realDonaldTrump at @CPAC pic.twitter.com/j6qHVlwd6f

In a move echoing other recent talks, Trump again denounced the socialist agenda of Democratic party members during his speech.

“America will never be a socialist country,” he said.

The Associated Press and the Reuters contributed to this report.