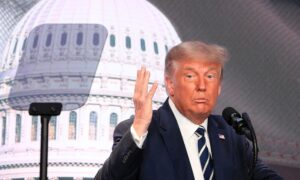 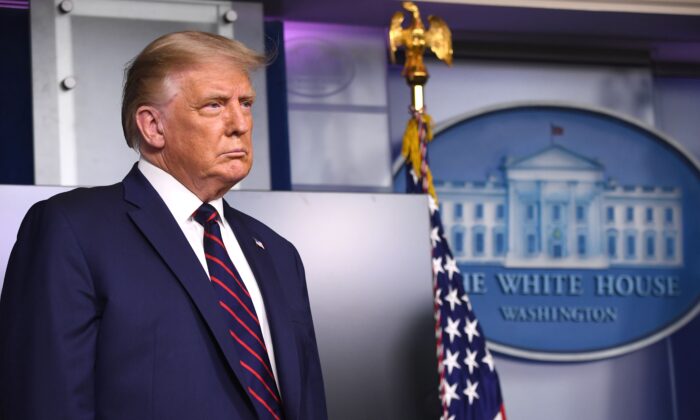 President Donald Trump during a press conference in the Press Briefing Room of the White House on Aug. 23, 2020. (Saul Loeb/AFP via Getty Images)
AMERICA

“I’m pleased to make a truly historic announcement … that will save thousands of lives,” Trump said, describing it as a “breakthrough in a fight” against the CCP (Chinese Communist Party) virus.

Trump announced that the Food and Drug Administration (FDA) made an emergency-use authorization of convalescent plasma for the virus, saying it is “safe and very effective.” He said the treatment will reduce mortality from the virus by about 35 percent.

Convalescent plasma treatments use blood from COVID-19 patients who have recovered and built antibodies against the virus. Doctors then infuse the plasma into new patients to prevent severe symptoms of the virus, according to the Mayo Clinic, which is researching the treatment.

Health and Human Services Secretary Alex Azar called on Americans to donate plasma to help battle the COVID-19 pandemic. He described the 35 percent death-reduction rate from the treatment as a “major breakthrough.”

Emergency authorization isn’t full FDA approval, but it suggests that the agency believes the benefits of the therapy outweigh the risks. Antiviral drug remdesivir is another medication approved by the FDA to treat COVID-19.

According to the FDA’s website: “Although promising, convalescent plasma has not yet been shown to be safe and effective as a treatment for COVID-19. Therefore, it is important to study the safety and efficacy of COVID-19 convalescent plasma in clinical trials.”

Convalescent plasma has been used since the 19th century to treat a variety of illnesses including chickenpox, diphtheria, and the flu. Namely, it was used to combat the Spanish flu pandemic from 1918 to 1920, which killed tens of millions of people.

“With plasma, we’re leveraging the body’s amazing ability to develop antibodies and immunity to pathogens,” Stony Brook Medicine researcher Elliott Bennett-Guerrero, who is studying the use of convalescent plasma in virus patients, told The Verge in April.

“We transfer those protective factors to people who are sick and haven’t been able to mount an immune response.”

“I hear great things about it … that’s all I can tell you,” Trump recently said during a White House briefing, referring to convalescent plasma therapy. “It could be a political decision because you have a lot of people over there who don’t want to rush things because they want to do it after Nov. 3, and you’ve heard that one before.”

On Aug. 22, Trump wrote on Twitter that someone at the FDA “is making it very difficult for drug companies to get people in order to test the vaccines and therapeutics,” adding that “obviously, they are hoping to delay the answer until after Nov. 3. Must focus on speed, and saving lives!”

His remarks were rebuked by House Speaker Nancy Pelosi (D-Calif.).

“The FDA has a responsibility to approve drugs judging on their safety and their efficacy, not by a declaration from the White House about speed and politicizing the FDA,” Pelosi said in a news conference.