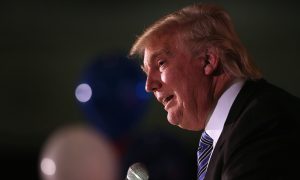 NEW YORK — He doesn’t need the money, but if Donald Trump’s presidential campaign falters, late-night comics would surely pass the hat to keep it going.

An animated Jon Stewart looked like he was second-guessing his decision to step away from “The Daily Show” in the wake of Trump’s declaration Tuesday. Stephen Colbert’s “Late Show” hasn’t started yet, but he couldn’t resist releasing a video. Seth Meyers pumped his fist in glee. And Larry Wilmore regarded Trump’s announcement as a literal gift from the comedy gods.

“I’ve got a show and Trump’s running for president,” said Wilmore, of Comedy Central’s “Nightly Show.” ”Good news for me, horrible news for our writers. Because all of the jokes are officially writing themselves.”

He is putting me in some kind of comedy hospice, where all you’re getting is straight morphine.
— Jon Stewart

He ran a clip reel of highlights from Trump’s speech, while contentedly munching on a steak dinner.

Stewart acted like a child waiting for dessert as he ran through video of campaign announcements by Hillary Clinton and Jeb Bush. Finally, he showed a clip of Trump riding an escalator down to where he made his presidential announcement.

“Hey, only losers walk,” Stewart said in a mocking New Yawk accent. What followed, he said, “was over a half-hour of the most beautifully ridiculous jibber-jabber ever to pour forth from the mouth” of a billionaire.

“It’s amazing!” he said. “America’s id is running for president.”

“He is putting me in some kind of comedy hospice, where all you’re getting is straight morphine,” he said.

Jimmy Fallon had Jeb Bush as a “Tonight Show” guest a day after the former Florida governor announced his presidential candidacy, but it was Trump who dominated the comic’s monologue. Fallon joked that he was going to have Trump on, “but the last time we checked he was still giving his speech.”

He said Trump would be the country’s first “Mad Libs” president. “I think Gary Busey wrote that speech,” Fallon said.

The other Jimmy, ABC’s Kimmel, said Trump would be like a “president and an amusement park all rolled up into one.”

NBC’s Meyers said that “in a speech cobbled together from forwarded emails from your uncle, he let us know what he thought that America needed.”

Colbert doesn’t begin on CBS until September, but he’s been posting occasional comic videos online. His latest video showed him at a podium making an announcement of his own, his hair teased into a bad combover to echo Trump’s and speaking the same rough, outer-borough accent.

In his announcement — that he’s still coming to CBS — Colbert nailed the rambling, surrealistic quality of Trump’s talk, including the unexpected, and seemingly annoying to the candidate, musical interludes. He touched on Trump’s emphasis on the Chinese “eating our lunch” in global competition.

“I don’t want to eat their lunch,” he said. “I’ve seen their lunch. Does it come with egg rolls? This administration is doing nothing to find out.”

He announced his wife was backstage having a drink and, prompted by an audience member, he performed a card trick.

“Here’s the sad news,” O’Brien said. “Season 15 of ‘Celebrity Apprentice’ will not air. But not to worry. With Trump running for president, you’ll still get to see an irrelevant B-list celebrity not get a job.”