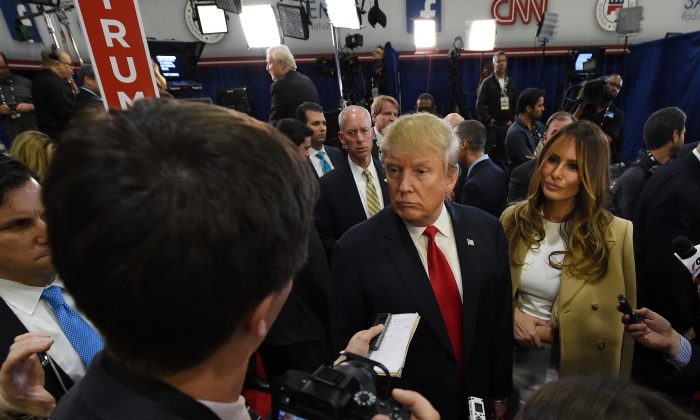 Donald Trump on Tuesday night apparently angered reporters and some members of America’s pundit class when he didn’t allow his press pool to trail him.

Trump went to a steakhouse, 21 Club, in Manhattan, about an hour after his spokeswoman, Hope Hicks, said he was going to sleep.

“I wasn’t aware of this movement,” she told the New York Post, adding she wouldn’t “leave the press in the dark.”

Diners inside the steakhouse were quite pleased. “There was a standing ovation when he came and left,” said Andrew Testo, 43. “He was with his whole family. It was like Sunday dinner with the Trumps, but on a Tuesday. It was awesome.”

Donald Trump lied to reporters last night and ditched them for a steak dinner with his family. https://t.co/Hwwpaou90R

A number of reporters criticized him on Twitter for breaking tradition and not informing the press of his moves.

But Hicks assured reporters that once a protective pool is set up for Trump, reporters will have “all of the access that they have ever had under any president,” Politico reported.

“We arrived outside the 21 Club, which is barricaded by police,” the Washington Post’s Jenna Johnson wrote. “I texted Hope Hicks, telling her we were outside the steakhouse and wanted to be let inside. She then called me.” She said that police divided reporters into two groups: those without NYPD press passes and those who had them.

@IamQueenAri when Trump doesnt say anything crazy for reporters for a week this becomes the news pic.twitter.com/iS0a8NcsFt

Reporters whine after President-elect Trump ditches them for a family dinner in NYC steakhouse https://t.co/8dR4ARyEyC pic.twitter.com/XYSc7ejX4n