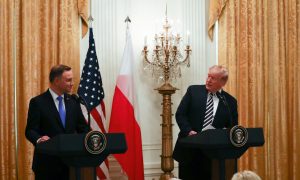 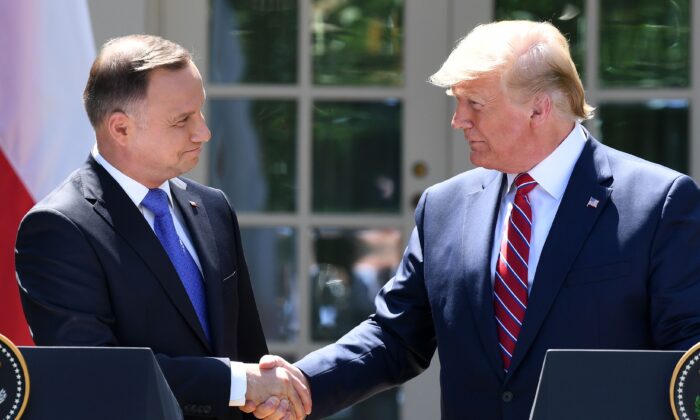 President Trump and Polish President Andrzej Duda shake hands after holding a joint press conference in the Rose Garden of the White House in Washington on June 12, 2019. (Saul Loeb/AFP/Getty Images)
US News

The declaration builds on the premise of a prior cooperation agreement, signed in June, which placed about 4,500 military personnel in Polish territory. That number will grow by about 1,000 in the near-term, according to the declaration signed in June.

The agreement was signed as a result of Poland’s request that the United States permanently deploy forces to the Eastern European country.

The declaration signed on Sept. 23 further details the locations and types of this military presence. The United States will station an area support group, air force, combat, and special operation force units in the Western part of Poland. A combat training center will also be established for joint use by Polish and U.S. armed forces.

Additionally, both countries will determine the most suitable location in Poland for an armored brigade combat team.

As stated in the prior agreement, Poland has offered to provide and sustain, at no cost to the United States, infrastructure needed for the efficient functioning of the U.S. forces, as well as additional support for U.S. forces, above the NATO host-nation standard.

“I must admit that we care about Poland’s security being strengthened by the permanent presence of the U.S. military forces,” Duda said. “To strengthen our security through American presence, I understand that we have to also bear some costs associated with it.”

The cost of infrastructure related to a permanent presence of U.S. forces would be about $2 billion. That estimate takes into account Polish reality, that is the actual prices—as they are in Poland—of the work that needs to be performed, Duda said.

In 2018, Poland was one of only seven of the 28 NATO countries that complied with the NATO guideline of spending 2 percent of its gross domestic product (GDP) on defense.

“Poland is situated in the center of Europe, sharing a border with four NATO allies, as well as a long border with Belarus and Ukraine, and a 144-mile border with Russia alongside the Kaliningrad Oblast,” according to a report produced by Daniel Kochis for The Heritage Foundation.

“Because of its large size, geographic location, and historical experience, [it] has become the lynchpin of security in Eastern Europe since joining NATO on March 12, 1999.”

“Poland is a crucial European ally and one that sees eye-to-eye with the U.S. on the threat from Russia,” Kochis wrote.

A survey conducted by Globsec, a global think-tank based in Slovakia, that focused on political views in Central and Eastern Europe, showed that 77 percent of Poles believe that Russia presents a significant threat to their country.

A permanent U.S. military base in Poland could be a key element in NATO’s forward defense strategy, said James Jay Carafano in a commentary on The Heritage Foundation’s website. Carafano said such a presence would send a strong message to Russia and would have an effect of deterring potential aggression.

An important element of strengthening ties among NATO allies and enhancing security in the region is the U.S. Visa Waiver Program (VWP), which allows citizens of specific countries to travel to the United States visa-free, yet vetted, for up to 90 days at a time. The VWP establishes standards for intelligence sharing related to counterterrorism and criminal investigations, as well as for secure passport control practices.

U.S. law requires that countries participating in VWP should have less than 3 percent of visa applications denied. During his visit to Poland in September this year, U.S. Vice President Mike Pence said that all information needed to determine if Poland satisfies that requirement should be assembled by the end of this month.

Trump said, in his remarks at the signing ceremony, “We’re also doing waivers—the visa waivers for Poland. And that’s in the works. We’re working on the structure right now.”