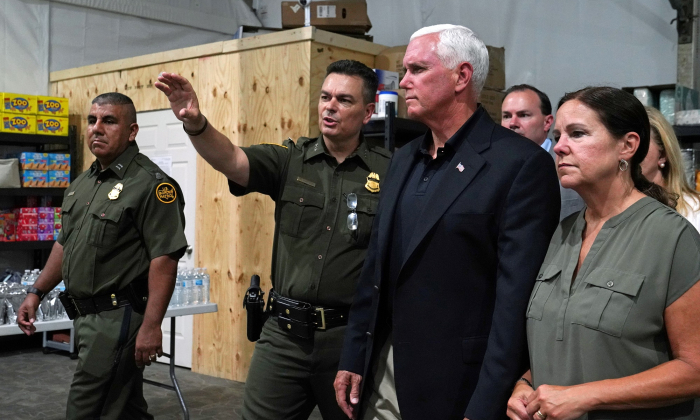 Pence and his wife, second lady Karen Pence, brought along several reporters for a tour of the Donna Holding Facility in Texas on July 12. The tour included separate areas for single adult men and families. After the tour, CNN broadcast only the portion of the visit to the area for single males, and didn’t show any footage from the facilities reserved for families.

“CNN is so dishonest. Today, we took reporters to a detention facility on the border for families and children and all told us they were being treated well,” Pence wrote on Twitter.

“Rather than broadcast the full story, showing the compassionate care the American people are providing to vulnerable families, tonight CNN only played video of men in the temporary facility and didn’t play any footage of the family facility at all, ignoring the excellent care being provided to families and children.”

“Our great Customs and Border Patrol agents deserve better and the American people deserve the whole story from CNN!”

Senators from the Senate Judiciary Committee and acting Secretary of Department of Homeland Security Kevin McAleenan accompanied the Pences during the tour.

The Trump administration and Republicans in Congress have consistently warned that the situation on the southwest border is a crisis. Democrats had, for months, called it a “manufactured crisis” and only recently changed their narrative and acknowledged the situation.

The establishment media has largely walked in lockstep with the Democrats, downplaying the crisis just six months ago, only to recently begin describing it in stark terms. Trump followed Pence’s criticism of the coverage, singling out a New York Times report that appears to have cherry-picked negative details of the visit.

“Friday’s tour showed vividly, to politicians and the media, how well run and clean the children’s detention centers are. Great reviews! Failing New York Times story was FAKE! The adult single men areas were clean but crowded – also loaded up with a big percentage of criminals,” Trump wrote on Twitter.

“Sorry, can’t let them into our Country. If too crowded, tell them not to come to USA, and tell the Dems to fix the Loopholes – Problem Solved!”

The 384 single men at the facility were given three hot meals a day from a local restaurant, but some had to sleep on the ground because there wasn’t enough room for cots where they were being held.

Many of the men hadn’t showered for 10 to 20 days because the facility didn’t previously have showers, according to Michael Banks, a patrol agent, who said it now has a trailer shower. Banks said the longest any man had been at the facility was 32 days.

During the tour, Pence was approached by some small children, and he asked them if they were being taken care of at the facility. The children nodded, with Pence responding, “God bless you.”