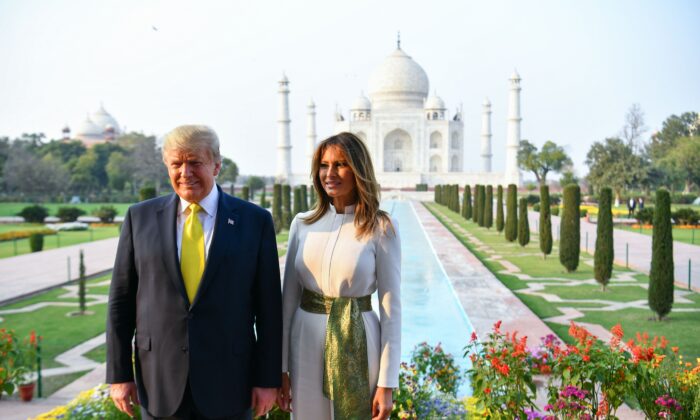 President Donald Trump and First Lady Melania Trump visited the Taj Mahal, the ivory-white marble mausoleum known as one of the world’s most iconic symbols of love, as well as Sabarmati Ashram, the former abode of Mahatma Gandhi, on Feb. 24 during their two-day state visit to India.

“The Taj Mahal inspires awe, a timeless testament to the rich and diverse beauty of Indian Culture!” Trump wrote in the monument’s visitor’s book.

The president began his first visit to India on Monday, starting by addressing over 100,000 people at the city of Ahmedabad’s newly constructed cricket stadium, the world’s largest, which he also inaugurated.

‘The Taj Mahal inspires awe, a timeless testament to the rich and diverse beauty of Indian Culture!’

-Writes Hon. President of the USA, Mr. @realDonaldTrump and First lady of the USA, Mrs. @MELANIATRUMP in Visitors’ book of @TajMahal. pic.twitter.com/WIoWE5VMAC

According to travel reports released by the White House, the president and the first lady traveled through the massive gardens leading to the mausoleum in a golf cart motorcade and then “walked together to the mausoleum which they visited while the pool stayed behind.”

Trump is the ninth U.S. President to visit India. President Barack Obama visited it in 2015 and George W. Bush​ did so in 2006.

As Trump walked back to the gate of the Taj Mahal he said, “Really incredible, an incredible place.”

Earlier during the day, after addressing the people in the crowded stadium, the president and the first lady visited Sabarmati Ashram, the former abode of Mahatma Gandhi.

Sabarmati Ashram is where Gandhi lived for 13 years and is of historical significance because he directed all the major activities of India’s civil rights movement against the British colonial rule from here.

According to the White House travel reports, Indian Prime Minister Narendra Modi was seen explaining to the President and the first lady how to use a traditional spinning wheel used by Gandhi.

US President @realDonaldTrump writes a message in the visitors’ book at the Sabarmati Ashram.#NamasteTrump pic.twitter.com/92gJrepIRP

Trump thanked Modi for his visit to the Sabarmati Ashram. “To my great friends, Prime Minister Modi, thank you for this wonderful visit!”

Modi later shared a few pictures on Twitter of the Trumps’ visit to the Ashram with the message, “The path and ideals of Mahatma Gandhi are not only globally popular but also very relevant in today’s times.”

Upon landing in Ahmedabad, @POTUS @realDonaldTrump and @FLOTUS @MELANIATRUMP went to Sabarmati Ashram.

The path and ideals of Mahatma Gandhi are not only globally popular but also very relevant in today’s times. pic.twitter.com/FyH1sOrhrn

Aparna Pande, research fellow and director of the India Initiative at the Washington-based Hudson Institute, told The Epoch Times that Mahatma Gandhi is the most recognizable Indian to Americans.

She noted that when last year Modi addressed a crowd of over 50,000 Indian-Americans in Houston, many of the speakers also talked about Gandhi.