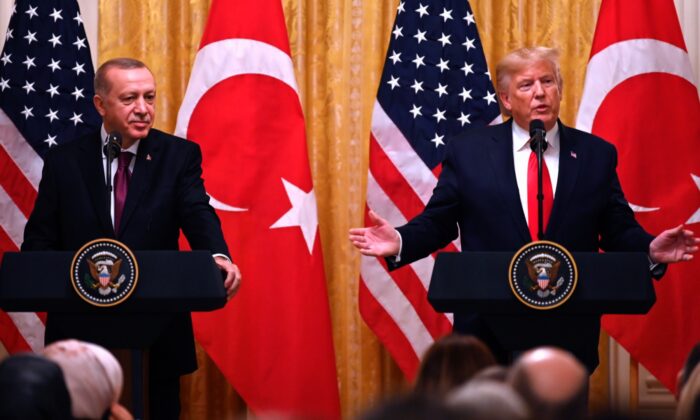 Trump discussed the conflicts in the region as he called for Russia to put an end to its support for the “atrocities” of the Syrian regime.

“President Trump conveyed the United States’ desire to see an end to Russia’s support for the Assad regime’s atrocities and for a political resolution to the Syrian conflict. President Trump also reiterated that continued foreign interference in Libya would only serve to worsen the situation,” Deere said.

In a statement, the Turkish presidency said the two leaders agreed by phone that Syrian government forces’ attacks in the northwestern province, which killed 13 Turkish troops, were unacceptable. The pair also exchanged views on an immediate halt to fighting in the region.

It comes after Erdogan on Feb. 12 said that Turkey’s military will strike Syrian government forces by air or ground anywhere in Syria if another Turkish soldier is hurt.

Erdogan said Turkey is determined to push Syrian government forces beyond Turkish observation posts in the northwestern Idlib region by the end of February, and he warned allied Syrian rebels not to give government forces an excuse to attack.

Violence has flared in the province, just south of Turkey’s border, in recent weeks as government forces backed by Russia and Iran have made gains in their campaign to eliminate the last insurgent bastion after the country’s 9-year war.

Turkey, which is allied with some rebel groups opposed to Syrian President Bashar al-Assad, mounted a counterattack on Feb. 11 after 13 Turkish military personnel were killed by Syrian shelling in Idlib this month.

“If there is the smallest injury to our soldiers on the observation posts or other places, I am declaring from here that we will hit the regime forces everywhere from today, regardless of Idlib’s borders or the lines of the Sochi agreement,” Erdogan said, referring to a 2018 ceasefire accord.

“We will do this by any means necessary, by air or ground, without hesitating, without allowing for any stalling,” he told members of his AK Party in Ankara. Russia, which has an air base in Syria, has controlled Idlib’s airspace for several years.