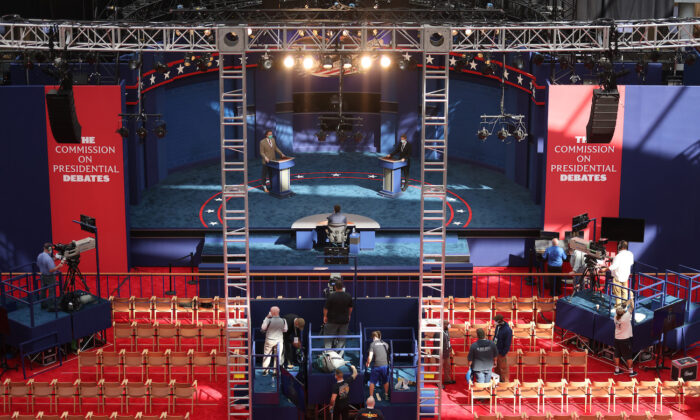 Students participate in a rehearsal for the first presidential debate at Case Western Reserve University and the Cleveland Clinic in Cleveland, Ohio, on Sept. 28, 2020. (Win McNamee/Getty Images)
2020 Election

Trump and Biden Will Not Shake Hands at First 2020 Presidential Debate, Commission Rules

There will be no handshakes or mask-wearing at the first 2020 presidential debate on Tuesday night, just over a month before the Nov. 3 general election.

The Commission on Presidential Debates (CPD), a self-described nonpartisan commission that arranges the debates, said that there will be no handshakes between President Donald Trump, Democratic presidential nominee Joe Biden, and debate moderator Chris Wallace, reported Fox News. All three individuals will also not be wearing masks.

The handshake between contenders for the presidency was a tradition decades long that was broken in 2016 when Trump and his then-opponent Hillary Clinton opted not to shake hands at their second and third debates.

The debate hall will have just 100 seats installed in front of the stage, allowing for a limited audience due to social distancing guidelines amid the CCP (Chinese Communist Party) virus pandemic.

The first debate will be held at Case Western Reserve University and Cleveland Clinic in Cleveland, Ohio, and will air live on Tuesday at 9:00-10:30 p.m. without commercial breaks.

The CPD announced on Sept. 22 six topics selected by Wallace for the upcoming debate, which are:

The topics will be debated over six 15-minute time segments. The debate is expected to last around 90 minutes.

The CPD explains the format of the debate on its website.

“The moderators alone will select the questions to be asked, which are not known to the CPD or to the candidates. The moderators will have the ability both to extend the segments and to ensure that the candidates have equal speaking time. While the focus will properly be on the candidates, the moderator will regulate the conversation so that thoughtful and substantive exchanges occur.

“The moderator will open each segment with a question, after which each candidate will have two minutes to respond,” it adds. “Candidates will then have an opportunity to respond to each other. The moderator will use the balance of the time in the segment for a deeper discussion of the topic.”

Fox News Sunday host Wallace joined Fox in 2003 after 14 years of his early career at NBC News followed by 14 years at ABC News. In 2016, he became the first Fox News anchor to host a presidential debate.

Two other debates between Trump and Biden are scheduled for Oct. 15 and Oct. 22.

Another debate will be held between Vice President Mike Pence and Democratic vice presidential nominee Kamala Harris on Oct. 7.