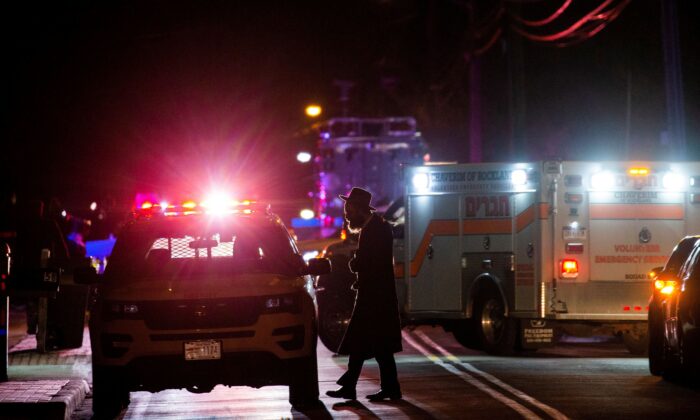 A Jewish man walks near the area where 5 people were stabbed at a Hasidic rabbi's home in Monsey, New York, U.S., December 29, 2019. (REUTERS/Eduardo Munoz)
Trump Presidency

President Donald Trump on Sunday called on Americans to confront rising anti-Semitism in the United States following a stabbing attack at the home of a New York City-area rabbi that left five people wounded on Hanukkah.

The suspect was identified by officials as Grafton E. Thomas, who was arraigned Sunday on five counts of attempted murder and a count of burglary for the Rockland County attack.

“The anti-Semitic attack in Monsey, New York, on the 7th night of Hanukkah last night is horrific. We must all come together to fight, confront, and eradicate the evil scourge of anti-Semitism. Melania and I wish the victims a quick and full recovery,” Trump wrote on Twitter on Sunday afternoon, referring to First Lady Melania Trump.

Rockland County Assistant District Attorney Michael Dugandzic said in court that he believes Thomas had no personal connection to the victims.

“It’s a serious offense. The defendant entered the residence, seriously injuring five people, one with a skull fracture who is still critical. He then fled the jurisdiction,” Dugandzic said, reported the New York Post.

In his Twitter statement, Trump stopped short of describing the attack as terrorism.

But New York Gov. Andrew Cuomo used the term when speaking to reporters outside the rabbi’s home in Monsey, which is a predominantly Orthodox Jewish community located within the New York City metropolitan area.

“Let’s call it what it is. These people are domestic terrorists and the law should reflect that and they should be punished as if it was an act of terrorism,” the governor told reporters on Sunday.

Cuomo called on the New York State Police Hate Crimes Task Force to look into the latest in a “disturbing” trend of at least 13 anti-Semitic attacks in the New York City metropolitan area in recent months.

“It’s important for me to express to the rabbi and for all of the people of New York that intolerance meets ignorances, meets illegality. We see anger. We see hatred exploding. It’s an American cancer in the body politic,” Cuomo added to reporters.

Aron Kohn, who was at Rabbi Chaim Rottenberg’s Hanukkah ceremony, told ABC News that he answered the door on Saturday night and saw the suspect wielding a large knife that was “like a broomstick.”

The assailant broke into the home and swung the knife, cutting victims. Panic spread and people rushed out the back door, he recalled.

New York City Mayor Bill de Blasio, whose city has seen an uptick in anti-Semitic attacks, said his city  is going to “use every tool we have to stop these attacks once and for all.”

The attack also drew a response from Israeli Prime Minister Benjamin Netanyahu, who told news outlets that his government “will cooperate however possible with the local authorities in order to assist in defeating this phenomenon,” and he offered the “best wishes for recovery to the wounded.”