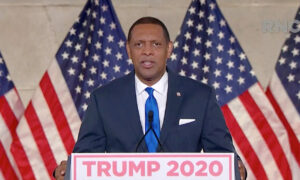 Democrat-turned-Republican and former Georgia state Rep. Vernon Jones is launching a 2022 bid for governor of Georgia against incumbent Gov. Brian Kemp, who lost favor with former President Donald Trump and many in the Republican Party over his state’s handling of the Nov. 3 presidential election.

Jones made the announcement on Friday from Liberty Plaza in Georgia’s Capitol during a press conference to officially launch his campaign for governor.

“On this historical day, I am planting my flag on the hallowed grounds of the Georgia state Capitol,” Jones said. “I am officially announcing my candidacy for governor of the great state of Georgia.”

Jones has been a strong ally to Trump, his America First agenda, and calling for election integrity in Georgia, saying that if he becomes governor, he will overhaul the election system. He also said Kemp had failed to secure free and fair elections in the state.

“The governor’s office has failed to fight for you and for me. He failed, those of us who hold dear, our freedoms, our Constitution, and the right to a free, fair, and transparent election,” said Jones.

Jones was referring to Kemp’s falling out of favor with Trump and many Republican voters because he did not challenge the 2020 presidential election results in his state, despite widespread allegations of voter fraud.

At the time, Kemp said he would not call a general assembly to allow the legislature to hold hearings on election fraud claims. State senators said they didn’t need his approval to do so.

“While we understand four members of the Georgia Senate are requesting the convening of a special session of the General Assembly, doing this in order to select a separate slate of presidential electors is not an option that is allowed under state or federal law,” Kemp said in a joint statement with Republican Lt. Gov. Geoff Duncan earlier this month.

Trump called for Kemp’s resignation and later vowed to campaign against the incumbent.

Jones highlighted his relationship with Trump and his unwavering support for the former president’s America First agenda.

“President Trump sends his regards to Georgia. I’ve had several meetings with him, talking about the future of our party, and the future of our country,” said Jones. “Certainly, George has always been on his mind and I agree and support his agenda of putting America first, and putting Georgia first,” said Jones, adding that he will “beat Stacey Abrams.”

Democrats are expected to put all their effort into winning the Georgia’s governor mansion in the 2022 elections and will most likely put their resources behind Stacey Abrams, who is seen as a key player in the Democrats winning the two Georgia Senate seats, with her success in turning out minority voters.

Trump has endorsed a handful of lawmakers running for seats in the 2022 elections but he has yet to officially endorse anyone for Georgia’s GOP gubernatorial primary.