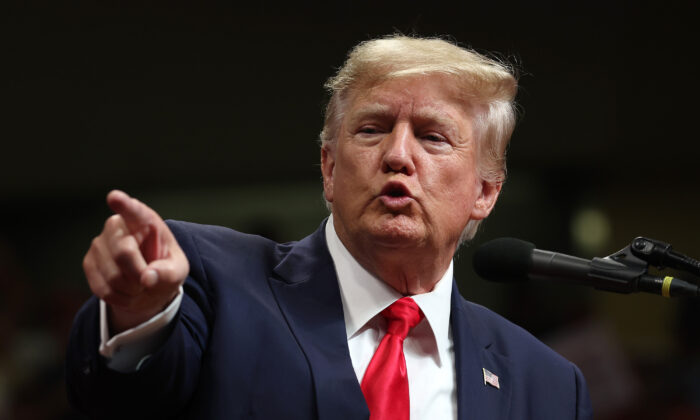 Trump: All Mar-a-Lago Materials Were ‘Declassified’

Former President Donald Trump on Friday said that the allegedly classified materials the Federal Bureau of Investigation (FBI) sought in the agency’s raid of his Mar-a-Lago resort were “all declassified.”

“Number one, it was all declassified,” Trump wrote on Truth Social on Friday, shortly before the court unsealed the search warrant the FBI used for its Aug. 8 raid of his Florida resort.

Trump’s comments directly contradict legacy media news reports following the raid that the documents were top-secret, with The Washington Post citing anonymous sources who claimed that the documents contained information about nuclear weapons. Trump panned the claim, calling it a “Hoax.”

While the warrant did not pinpoint what probable cause the FBI established to conduct the raid, it showed the items that federal agents took from the former president’s resort, which included “Various classified/TS/SCI documents,” binders of photos, a “Grant of Clemency” to Roger Stone, a “Confidential Document,” “Miscellaneous Secret Documents,” and “Miscellaneous Top Secret Documents.”

The question becomes whether Trump, by simply possessing any of these documents, would have violated any federal codes listed in the search warrant, which the federal agents pursued:

According to Mike Davis, President of the Article III Project and a former law clerk under Supreme Court Justice Neil Gorsuch, the president of the United States can declassify records by simply leaving the White House with them.

“The President of the United States has both the constitutional (and statutory) power to declassify anything he wants,” Davis wrote on Twitter on Aug. 11. “If President Trump left the White House with classified records, they are declassified by his actions.”

“As discussed, the Office of Former President Trump—like every other former president’s federal office—is equipped and secure enough to handle these declassified records,” Davis added. “This is a routine dispute with bureaucrats at the National Archives whether these are presidential records.”

Davis cited Department of Navy v. Egan (ruling), a 1988 Supreme Court decision that Davis says shows the president possesses the constitutional power to “classify and declassify” records “regardless of any statute passed by Congress.”

“The President, after all, is the ‘Commander in Chief of the Army and Navy of the United States,'” The Supreme Court ruled at the time. “His authority to classify and control access to information bearing on national security and to determine whether an individual is sufficiently trustworthy to occupy a position in the Executive Branch that will give that person access to such information flows primarily from this constitutional investment of power in the President and exists quite apart from any explicit congressional grant.”

“When President Trump had the records sent to Mar-a-Lago, they were declassified,” Davis explained. “Former presidents don’t have this power. But Trump did this as the president.”

Trump and his allies have characterized the raid as a “witch hunt” driven by political motives, especially considering no former presidents had been prosecuted for the reason that the FBI allegedly told sources close to Trump that motivated the raid; namely, Trump was nominally required by the Presidential Records Act to return the materials to the National Archives and Records Administration (NARA) upon the conclusion of his term, but allegedly didn’t.

“NARA’s singling out of President Trump’s handling of official records stands starkly in contrast to the way NARA has treated far clearer violations committed by politicians and officials who are not Republicans,” 20 Republicans, including numerous Committee ranking members, wrote in an Aug. 10 letter addressed to U.S. Acting Archivist Debra Wall, first published by Politico. The lawmakers cited reports that point to recent U.S. administrations’ violations of the Presidential Records Act, listing Bill Clinton as an example.

“The seeming weaponization of the federal government against President [Joe] Biden’s political rivals cannot go unchecked, and if NARA is working to further these efforts, it will be only the latest agency to lose its credibility in the eyes of the American people under the Biden Administration,” the Republican lawmakers wrote.

Meanwhile, Trump revealed earlier this week that the FBI had recently been given a tour of where the records were stored, with the FBI only suggesting that Trump further secure the storage space.

“In early June, the DOJ and FBI asked my legal representatives to put an extra lock on the door leading to the place where boxes were stored in Mar-a-Lago – We agreed,” Trump said in a post on Truth Social on Aug. 10.

“They were shown the secured area, and the boxes themselves,” Trump added. “Then on Monday, without notification or warning, an army of agents broke into Mar-a-Lago, went to the same storage area, and ripped open the lock that they had asked to be installed. A surprise attack, POLITICS, and all the while our Country is going to HELL!”