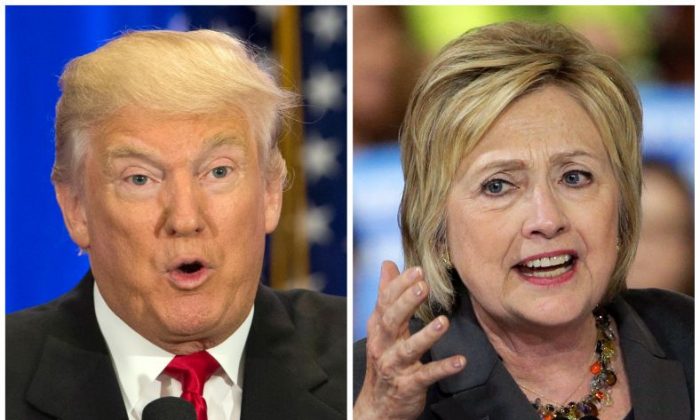 This file photo combo of file images shows U.S. presidential candidates Donald Trump, left, and Hillary Clinton. Trump wants to spur more job creation by reducing regulations and cutting taxes to encourage businesses to expand and hire more. He also says badly negotiated free trade agreements have cost millions of manufacturing jobs. He promises to bring those jobs back by renegotiating the NAFTA agreement with Canada and Mexico, withdrawing from a proposed Pacific trade pact with 11 other nations, and pushing China to let its currency float freely on international markets. Clinton has promised to spend $275 billion upgrading roads, tunnels and modern infrastructure such as broadband Internet, to create more construction and engineering jobs. Trump has said in interviews he would spend twice as much. (AP Photo/Mary Altaffer, Chuck Burton, File)
Politics

Donald Trump’s incoming chief of staff suggests Hillary Clinton is backing away from a deal worked out between the two presidential campaigns on how the loser would concede to the winner.

Reince Priebus told “Fox News Sunday” that Clinton’s team “cut a deal” with Trump’s team specifying that once The Associated Press called the race in favor of one candidate, the other would call within 15 minutes to concede.

But now he’s questioning whether Clinton campaign lawyer Marc Elias is backing down from that deal by announcing Clinton will participate in a recount in Wisconsin and may do the same in Michigan and Pennsylvania. The push is being led by the Green Party’s Jill Stein.

AP’s director of media relations, Lauren Easton, says AP “calls races when it is clear that one candidate has prevailed over the other. We have no knowledge of what the candidates do with that information until there is a public claim of victory or a concession.”