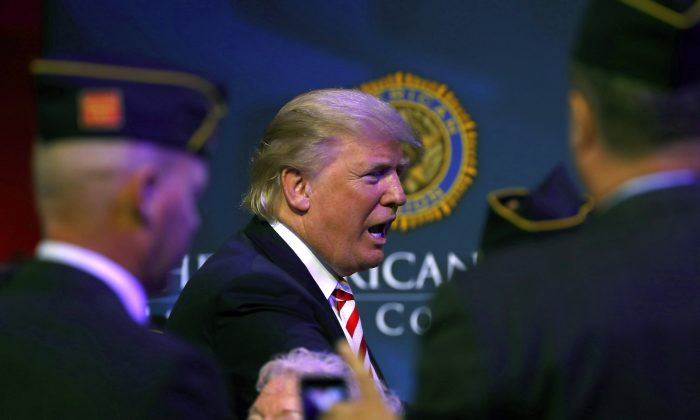 The Republican and Democratic presidential nominees are participating in a live televised forum to discuss national security, military affairs, and veterans issues on Sept. 7. A poll released the same day shows the GOP candidate leading among those serving in the military.

Donald Trump and Hillary Clinton will answer questions at “The Commander-in-Chief Forum” hosted by NBC News with the Iraq and Afghanistan Veterans of America at the Intrepid Sea, Air & Space Museum in New York City. Clinton will give her answers first, a coin toss determined. The candidates will not be on stage together.

Meanwhile, a recent NBC News/Survey Monkey online poll shows Trump leading over Clinton by 19 points, 55 percent to 36 percent among those currently in the military as well as veterans. The poll was conducted from Aug. 29 to Sept. 4 among more than 30,000 registered voters.

On Tuesday, the Trump campaign released a letter featuring endorsement from 88 retired generals and admirals.

“It is a great honor to have such amazing support from so many distinguished retired military leaders,” said Trump in a statement. “I thank each of them for their service and their confidence in me to serve as commander-in-chief.”

The next day, the Clinton camp released a list of 95 retired generals and admirals that support the Democrat.

“Clinton is getting the backing of more senior military service members and former officials with command and management experience than any non-incumbent Democrat due to her proven record of diplomacy and steady leadership on the world stage,” said the Clinton team in a statement. “She will make her case tonight at the Commander-in-Chief Forum presented by NBC and the Iraq and Afghanistan Veterans of America.”

Among military and veteran voters, 53 percent say they would be confident in Trump’s ability to serve as an effective commander-in-chief of the U.S. military, the poll shows, compared to 47 percent who do not.

Only 35 percent of military and veteran voters say they would feel confident in Clinton’s ability to serve as commander-in-chief, compared to 64 percent who say they would not.