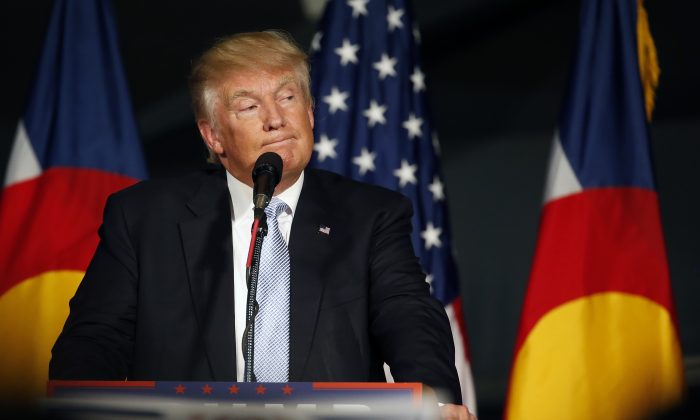 WASHINGTON—Donald Trump is defending his criticism of the bereaved parents of a Muslim U.S. Army captain, taking to Twitter Sunday to say the father “viciously attacked” him in his speech at the Democratic National Convention.

“Am I not allowed to respond?” Trump tweeted. “Hillary voted for the Iraq war, not me!”

It was the latest bitter rhetorical volley since the two parties concluded their major conventions last week and the nation looked ahead to a close election this November. Wasting no time, Trump headed to Colorado — a key swing state — while Hillary Clinton took running mate Sen. Tim Kaine on a bus-tour through Ohio and Pennsylvania.

Clinton used her first television interview since officially clinching the Democratic nomination to cast Trump as dangerously pro-Russia and an unknown quantity for U.S. voters. She said she realizes that people often see a “caricature” of herself as a politician but that she hopes American voters will review her track record as a U.S. senator and secretary of State.

Of Trump, she told “Fox News Sunday,” ”He’s not temperamentally fit to be president and commander in chief.”

At last week’s Democratic National Convention, Pakistan-born Khizr Khan told the story of his son, Humayun, who received a Bronze Star and a Purple Heart after he was killed by a suicide bomber in Iraq in 2004. Khan questioned whether Trump had ever read the Constitution because of his anti-immigration positions. He said to Trump: “You have sacrificed nothing.”

During the speech, Khan’s wife, Ghazala, stood quietly by his side.

“If you look at his wife, she was standing there. She had nothing to say. She probably, maybe she wasn’t allowed to have anything to say. You tell me,” Trump said, in an interview with ABC’s “This Week.”

Ghazala Khan has said she didn’t speak because she’s still overwhelmed by her grief and can’t even look at photos of her son without crying.

Trump also disputed Khan’s criticism that the billionaire businessman has “sacrificed nothing and no one” for his country.

But John Kasich, the Ohio governor who sought the GOP presidential nomination, said on Twitter, “There’s only one way to talk about Gold Star parents: with honor and respect. Capt. Khan is a hero. Together, we should pray for his family.”

“While I feel deeply for the loss of his son, Mr. Khan who has never met me, has no right to stand in front of millions of people and claim I have never read the Constitution, (which is false) and say many other inaccurate things,” said Trump.

Trump’s rebuke seemed strange in the world of politics where officials only speak well of families whose loved ones die in service to their country. When Cindy Sheehan, who lost her son in Iraq, staged prolonged protests on the war, then-President George W. Bush responded by saying that the nation grieves every death.

When asked about the mother of a State Department official killed in Benghazi, Libya, who blamed Clinton for her son’s death, Clinton said her “heart goes out” to the families and that she didn’t “hold any ill feeling for someone” who has lost a child and recalls events differently.