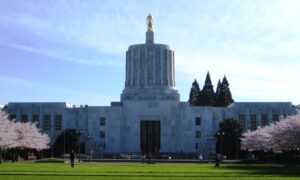 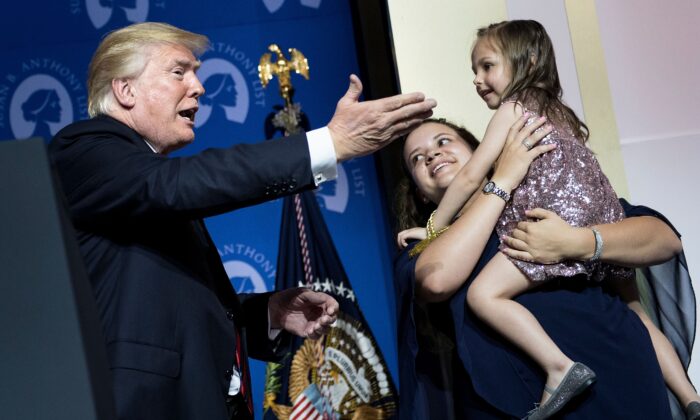 President Donald Trump (L) greets Katharine Alexander, who was born addicted to opioids, and her adoptive mother Lisa Alexander, during the Susan B. Anthony List 11th Annual Campaign for Life Gala at the National Building Museum in Washington on May 22, 2018. (BRENDAN SMIALOWSKI/AFP via Getty Images)
Politics

Previously, these facilities couldn’t operate with federal funding if they practiced supposed religious discrimination toward groups including homosexual foster parents.

This move is the latest step in the administration’s push to improve the quality of care and reduce the number of children in the U.S. foster care system.

“Today, the administration is proposing a regulation to fulfill Trump’s promise to allow faith-based social service providers who receive HHS grants to continue serving their communities without compromising their beliefs,” a senior administration official told The Washington Times on Nov. 1, referring to the rule change.

Recently, the faith-based Michigan provider Bethany Christian Services announced that it would amend its practices to comply with the Obama-era law banning the Christian organization from refusing to place children with homosexual foster parents.

On Nov. 5, in the aftermath of Trump’s decision, a Christian provider called New Hope Family Services was allowed to remain open in New York State without being required to show compliance with the Obama-era law, according to the U.S. Court of Appeals for the Second Circuit.

Trump’s announcement means that Christian providers such as Bethany Christian Services no longer have to adopt practices that are contrary to their beliefs.

The Epoch Times has recently reported on how non-religious foster care providers have been accused of overseeing and covering up instances of sexual assault or child prostitution, raising scrutiny of child protective services (CPS) agencies that remove children from their original biological families’ homes.

The Trump administration is also highlighting its initiative to decrease the number of children in the foster care system.

“We must strive to keep families united, wherever possible, and my Administration is working to reduce the removal of at‑risk children from their homes and familiar surroundings,” Trump stated in his proclamation on National Foster Care Month in April 2019.

“Last year, I signed into law the Family First Prevention Services Act, which is working to bolster families and keep children safely in their homes, when possible.

“This legislation gives States access to funding for evidence‑based prevention and early intervention services such as mental health therapy, family counseling, substance use and addiction treatment, and parenting classes. By allowing States to address factors, such as the opioid crisis, America’s sons and daughters are more likely to experience improved outcomes and hope for a brighter future.”

While this statistical progress appears to be minimal, Trump’s Family First Prevention and Services Act—which he appended to a short-term budget bill in 2018—only went into effect on Oct. 1, 2019, peeling away financial incentives to take children out of their homes. Parental rights advocates have long cited the Clinton administration’s Adoption and Safe Families Act as the force that created financial incentives to place kids in the foster care system to await adoptions, which states benefit from financially, courtesy of the federal government.

“It is encouraging to see the first decrease since 2011 in the number of children in foster care,” Lynn Johnson, assistant secretary for children and families at HHS, said on Oct. 4. “This administration has focused on primary prevention and adoption, and we are starting to see some better results.”

“Helping families receive the care and services they need before the involvement of a child welfare agency can help prevent a child from entering foster care. I am thankful for all of the local, state and federal agencies who work hard every day to find the safest solution for our children,” Administration on Children, Youth, and Families Commissioner Elizabeth Darling said Oct. 31 in a statement provided to The Epoch Times.

HHS also highlighted its new program launched at the end of September, which creates “a five year award of nearly $25 million to nine community-based projects to help prevent child maltreatment and reduce entries into foster care,” according to the agency. HHS’s initiative includes a series of commercials encouraging the adoption of foster care children.

The Trump administration has also put out a call for public comments regarding child trafficking allegations in the U.S. foster care system.