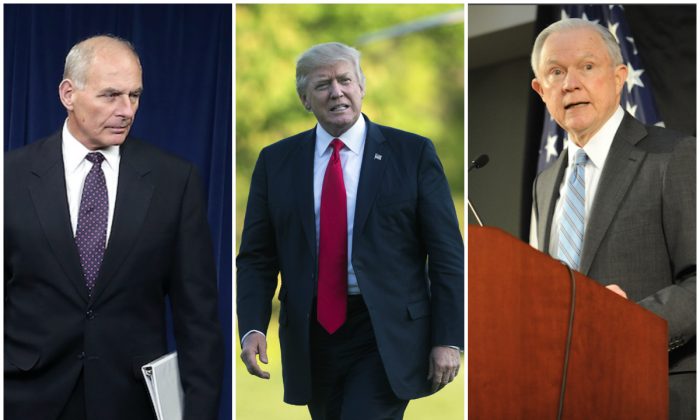 President Donald Trump and two of his key cabinet chiefs addressed the growing problem of the violent transnational MS-13 gang on April 18, with Attorney General Jeff Sessions even saying the gang could qualify as a terrorist organization.

And Trump sent out a tweet: “The weak illegal immigration policies of the Obama Admin. allowed bad MS 13 gangs to form in cities across U.S. We are removing them fast!”

The MS-13, or Mara Salvatrucha, gang was formed in Los Angeles in the 1980s by mostly-illegal immigrants who were escaping the civil war in El Salvador.

It is now one of the largest criminal organizations in the country, with 6,000 to 10,000 members in at least 42 states, according to FBI estimates. In addition, more than 60,000 members operate internationally, mostly in El Salvador, Honduras, and Guatemala.

Robert Capers, former U.S. attorney for the Eastern District of New York, said MS-13 gets gang members to illegally enter the United States from Central America and recruits new members from schools and communities around the country.

Lax immigration enforcement policies have allowed the gang to proliferate throughout the United States, often in lockstep with large numbers of unaccompanied minors from Central America being placed in communities by the Office of Refugee Resettlement.

In the last 3 1/2 years, around 30,000 of these young people have been placed in just four counties in the United States—Harris County in Texas, Los Angeles County, Suffolk County in New York, and Miami-Dade County in Florida.

All four counties are struggling with MS-13 gang violence.

Homeland Security chief John Kelly outlined his agency’s approach to gangs at George Washington University on April 18 during a wide-ranging speech on terrorism and security.

“They intimidate, kidnap and torture those who try to bring law and order. They buy, sell, and exploit desperate people for their own sick purposes. They destroy their own communities and bring great shame on their own nations,” Kelly said.

MS-13 was the only transnational criminal organization that Kelly identified by name.

“They are utterly without laws, conscience, or respect for human life. They take the form of drug cartels, or international gangs like MS-13, who share their business dealings and violent practices.”

Kelly reinforced the agency’s stance on stringent border control, saying, “There is no better argument for secure borders than transnational criminal organizations.”

Efforts at the southwest border resulted in fewer than 16,600 people being apprehended by Border Patrol trying to enter the country illegally in March, Customs and Border Protection statistics show—the lowest month in 17 years.

Sessions told Fox News’s Tucker Carlson on Tuesday night that MS-13 had come back aggressively in recent years, especially since 2009.

“It is one of the most violent gangs in the history of our country,” Sessions said. He said his goal is to “devastate” the gang. “It’s going to be hard, but not impossible. These are not geniuses.”

Under the last administration, during the surge across the southwest border, individuals were “directed how to enter, if they came, and claim themselves as a minor and the Obama administration let them come in the country and took them to their destination city and turned them over to some relative that claimed to be a relative.”

Sessions said it’s possible MS-13 could be labeled as a terrorist organization. “I believe it could qualify for that.”

However, Paul Rexton Kan, professor of national security studies at the U.S. Army War College, said MS-13 does not qualify as a terrorist organization based on any definition with the U.S. government.

The FBI defines terrorism as “the unlawful use of force or violence against persons or property to intimidate or coerce a government, the civilian population, or any segment thereof, in furtherance of political or social objectives.”

Groups designated as terrorist organizations are generally subject to greater surveillance and assigned additional criminal penalties, among other things, according to Kan.