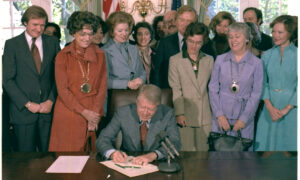 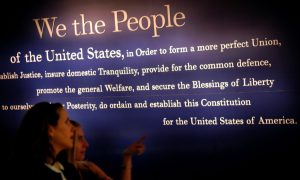 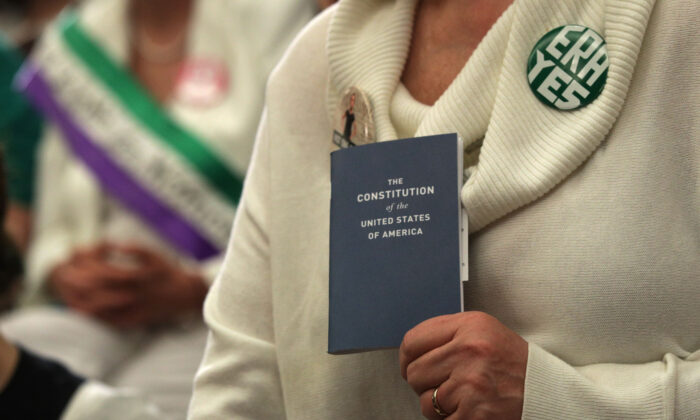 An activist holds a copy of the U.S. Constitution during a news conference on women’s rights on Capitol Hill in Washington, on April 30, 2019. (Alex Wong/Getty Images)
Judiciary

The Trump administration is urging a federal court to toss out a lawsuit attempting to compel the United States to adopt the Equal Rights Amendment (ERA) as part of the U.S. Constitution.

The Justice Department (DOJ) filed a motion to dismiss the lawsuit on May 8, arguing that the courts have a limited role in resolving the dispute on whether a deadline adopted by Congress for the ratification of the ERA is valid.

“Plaintiffs ask this Court to declare that the States are subject to no deadline whatsoever to ratify the ERA based on their assertion that a deadline ‘would upset the important balance the Framers struck between congressional and state authority,’” the administration wrote in its filing (pdf). “But all of these issues are for the political branches to resolve.”

In late January, three states—Nevada, Illinois, and Virginia—filed a lawsuit against U.S. Archivist David Ferriero in order to force him to adopt and publish the ERA into the Constitution. The lawsuit came after Virginia became the 38th state to ratify the amendment earlier this month.

The Constitution requires 38 state ratifications, or three-fourths of the 50 states before an amendment can be adopted.

The states’ attorneys general said that the National Archives and Records Administration (NARA) took no action after it was sent an “official notice” on Jan. 27 that the ERA had been adopted pursuant to the Constitution.

Although the required number of states to adopt the ERA into the Constitution has been reached, the original congressional deadline to ratify the ERA has lapsed, sparking ongoing debates on whether these ratifications are valid.

The Justice Department’s Office of Legal Counsel (OLC) issued a legal opinion in early January arguing that the deadline to ratify the ERA had already expired and that if Americans wish to adopt the amendment, Congress should restart the process as stipulated under Article V of the Constitution.

“Accordingly, should Congress now ‘deem [the ERA] necessary,’ U.S. Const. art. V, the only constitutional path for amendment would be for two-thirds of both Houses (or a convention sought by two-thirds of the state legislatures) to propose the amendment once more and restart the ratification process among the States, consistent with Article V of the Constitution,” the OLC opinion stated.

The NARA issued a statement on Jan. 8 saying it will follow the DOJ’s legal opinion on the matter of the ERA, “unless otherwise directed by a final court order.”

The DOJ drew on an old Supreme Court case to argue that the top court had already ruled that Congress may establish a deadline for the ratification of constitutional amendments “so that ‘the expression of the approbation of the people’ is ‘sufficiently contemporaneous’ in the ratifying States ‘to reflect the will of the people in all sections at relatively the same period.'”

They say the ERA follows the path as set out by the precedent. The amendment was first proposed in Congress in 1923 and was passed in 1972, where it then went to the states for ratification, according to the Alice Paul Institute. Congress gave the states a seven-year deadline, which was then extended to 1982, but only 35 states had ratified the amendment, falling short of the necessary 38 state ratifications. A new push by advocates in recent years to pass the proposal prompted Nevada and Illinois to ratify the amendment in 2017 and 2018, respectively.

The administration argues that the three states’ request “is contrary to Supreme Court precedent prohibiting courts from second-guessing the legislature’s inclusion of a deadline for ratification.”

It also argued that the court should not get involved, because the states have “independent authority” to put in measures to protect “residents against sex discrimination in the manner they believe the ERA requires.”

The ERA seeks to ban discrimination on the basis of sex, with supporters seeing it as a critical provision to protect women’s rights under the Constitution.

The text of the ERA reads:

Section 1: Equality of rights under the law shall not be denied or abridged by the United States or by any state on account of sex.
Section 2: The Congress shall have the power to enforce, by appropriate legislation, the provisions of this article.
Section 3: This amendment shall take effect two years after the date of ratification.

Virginia Attorney General Mark R. Herring criticized the Trump administration’s motion in a statement, saying that “Donald Trump is telling the women of America that, after 231 years, they should just sit down and wait even longer for equal treatment under the Constitution.”

“If the Trump Administration opposes a Constitutional guarantee of equality for women then they should just say so rather than hiding behind process and trying to throw the issue into Mitch McConnell’s hands. No matter what schemes the Trump Administration may concoct to try to stand in the way of progress, this movement has shown time and again that it will not be deterred and it will not be defeated,” Herring said.

He added that he and the other states are planning to file briefs in response to the motion.

Many legal scholars have debated whether the ERA can be added to the Constitution at this point.

Proponents of the ERA have long been arguing that the congressional deadline is invalid because the seven-year deadline was placed in the proposing clause and not in the text of the amendment itself. They argue that by putting the time limit in the proposing clause, Congress has retained the authority to review and amend it. Similarly, they claim that Congress can extend deadlines retroactively. Meanwhile, on the issue of rescission, supporters argue that once a state ratifies the proposal, they can no longer rescind.

Meanwhile, some academics believe it’s not a viable argument to say the ERA can be ratified at this point and that if the ERA is to be adopted, the process needs to start over.

Supreme Court Justice Ruth Bader Ginsburg, a strong advocate for the ERA, agreed that the ratification process needs to “start over.”

“I would like to see a new beginning. I’d like it to start over,” said Ginsburg said during a talk at Georgetown Law in February.

“There’s too much controversy about latecomers. Virginia [came] long after the deadline passed. Plus a number of states have withdrawn their ratification. So if you count a latecomer on the plus side, how can you disregard states that said ‘We’ve changed our minds’?”

Five states—Nebraska, Tennessee, Idaho, Kentucky, and South Dakota—have voted to either rescind or withdraw their ratification of the ERA. These rescissions have also sparked legal debates as Article 5 of the Constitution is silent on the issue.