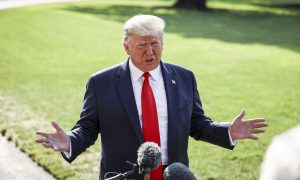 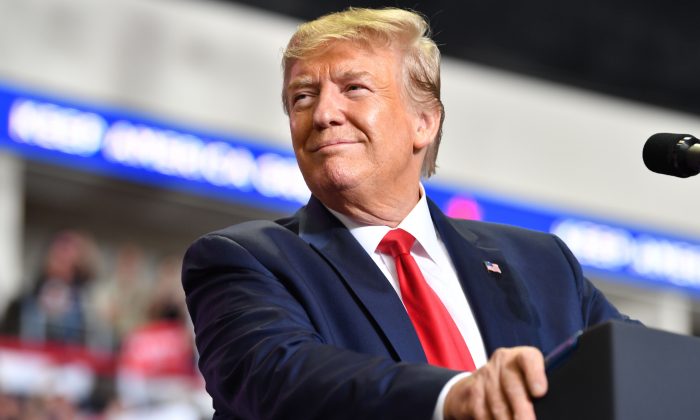 President Donald Trump announced that his administration is revoking a waiver that allows California to set its own greenhouse gas and vehicle fuel-efficiency limits for passenger cars.

Trump said on Sept. 18 that the administration’s move could “produce far less expensive cars for the consumer,” while also making cars safer.

“This will lead to more production because of this pricing and safety advantage, and also due to the fact that older, highly polluting cars, will be replaced by new, extremely environmentally friendly cars. There will be very little difference in emissions between the California standard and the new U.S. standard, but the cars will be far safer and much less expensive,” he said.

“Many more cars will be produced under the new and uniform standard, meaning significantly more JOBS, JOBS, JOBS! Automakers should seize this opportunity because without this alternative to California, you will be out of business,” he added.

….far safer and much less expensive. Many more cars will be produced under the new and uniform standard, meaning significantly more JOBS, JOBS, JOBS! Automakers should seize this opportunity because without this alternative to California, you will be out of business.

The White House plans to issue a separate rule to roll back Obama-era fuel efficiency standards.

The administration’s move comes after the Justice Department opened an antitrust investigation into a deal between California and four automakers for tougher pollution and related mileage requirements than those sought by the president.

The Golden State’s ability to set stricter tailpipe emission standards comes from an Obama-era waiver to the Clean Air Act issued by Congress during the passage of that legislation in 1970. The state has long pushed automakers to adopt more fuel-efficient passenger vehicles that emit less pollution; a dozen other states and Washington also follow California’s standards.

The move is expected to be met with resistance and would likely set off legal challenges over issues that include states’ rights and climate change, which administration officials say could ultimately be decided by the Supreme Court.

The state’s rule “requires automakers to produce cars that pollute less and emit fewer greenhouse gases through model year 2025,” California Gov. Gavin Newsom said in a statement on Sept. 17 in response to reports about the Environmental Protection Agency’s (EPA) plan to revoke the waiver.

“While the White House has abdicated its responsibility to the rest of the world on cutting emissions and fighting global warming, California has stepped up. In July, we came to landmark voluntary agreements with four major automakers to reduce vehicle emissions and oppose Washington’s rollback of clean air standards. We are showing it can be done,” he said.

“We will fight this latest attempt and defend our clean car standards. California, global markets, and Mother Nature will prevail.”

Similarly, state Attorney General Xavier Becerra vowed to fight any attempt by the Trump administration to revoke the state’s authority.

“We’re ready to fight for a future that you seem unable to comprehend; we’ll see you in court if you stand in our way,” Becerra said in a statement on Sept. 17.

EPA Administrator Andrew Wheeler told the National Automobile Dealers Association on Sept. 17 that the agency’s goal is to establish a nationwide set of fuel-economy standards.

“We embrace federalism and the role of the states, but federalism does not mean that one state can dictate standards for the nation,” Wheeler said, adding that higher fuel economy standards would hurt consumers by increasing the average sticker price of new cars and requiring automakers to produce more electric vehicles.