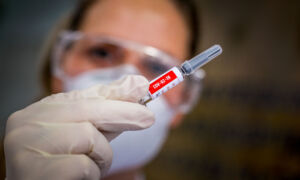 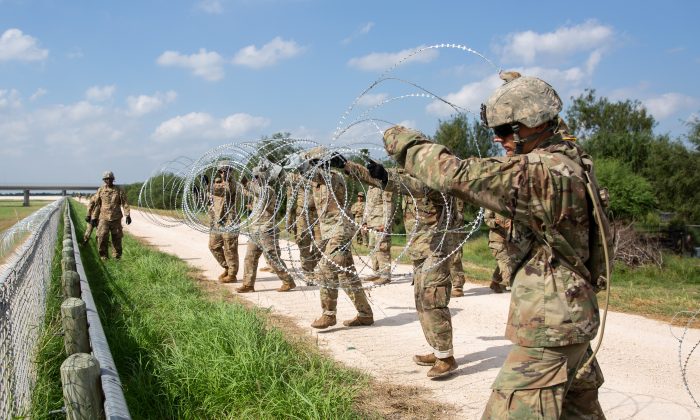 The U.S. military installs concertina wire on the levee behind Granjeno in Texas, just north of the U.S.-Mexico border on Nov. 7, 2018. (Samira Bouaou/The Epoch Times)
Viewpoints

“Acting Attorney General Matthew Whitaker and Department of Homeland Security Secretary Kirstjen Nielsen today announced an Interim Final Rule declaring that those aliens who contravene a presidential suspension or limitation on entry into the United States through the southern border with Mexico issued under section 212(f) or 215(a)(1) of the Immigration and Nationality Act (INA) will be rendered ineligible for asylum.”

This is the unveiling of a new rule about how the asylum system will be implemented for illegal immigrants going forward. The press release notes the most pressing reason for this crucial rule change later in the text:

“Our asylum system is overwhelmed with too many meritless asylum claims from aliens who place a tremendous burden on our resources, preventing us from being able to expeditiously grant asylum to those who truly deserve it.”

This is fantastic news, because a change like this to U.S. immigration/border enforcement policy has been long overdue. The present system has been a farce. Under the old rule, any immigrant in the country illegally arrested anywhere could instantly claim asylum and a case had to be filed for them, taking up resources and valuable time from an already overburdened asylum system.

The “before” and “after” effect of this new rule is going to be stark. Instead of sneaking into the United States and making an asylum claim only after getting caught and facing deportation, immigrants now will have to present themselves to border authorities at a legal point of entry, surrender themselves to custody, and only then, will they be allowed to file for asylum. While the case is being processed, they will be held in tent cities, and if their claim is found to be without merit or bogus, they will then be deported back to where they came from.

Requiring asylum-seekers to go to a border checkpoint and surrender themselves to the custody of the border patrol is what should have been happening all along. Instead, thanks to the Democratic Party’s insistence on open borders, a dysfunctional system was created where people who sneaked into the country and got caught in the United States were allowed to retroactively claim they were asylum-seekers.

President Donald Trump had made it a critical point in recent weeks to comment on how overwhelmed the border facilities are as they try to cope with a staggering number of asylum cases, with many of them turning out to be without merit. He had openly hinted on Nov. 1 that this unacceptable situation would be addressed soon.

The joint statement from Whitaker and Nielsen makes it clear that the president has broad authority under existing immigration law to direct the federal agencies involved in securing the nation’s borders to implement and enforce this new rule:

The abuse of the current system was ended by the president exercising powers well within the scope of his office.

Now that the asylum issue has been settled in advance of the arrival of the large migrant caravans slowly making their way from Central America and passing through Mexico, Trump will most likely turn his attention back to the national debate he started in recent weeks when he said he was considering using an executive order to end the practice of birthright citizenship.

Immigration was Trump’s main issue in 2016 and he believes it won him the election. It isn’t surprising to see him immediately return to the issue after the mixed results of the midterm elections, where the Republican Party expanded its control of the Senate but lost the House majority to the Democrats.